The Way We Pray Prayer Practices from Around the World

Nothing is more conducive to a communion with the living God than a meditative common prayer with . . . singing that never ends and that continues in the silence of one's heart when one is alone again. When the mystery of God becomes tangible through the simple beauty of symbols, when it is not smothered by too many words, then prayer with others, far from exuding monotony and boredom, awakens us to heaven's joy on earth.
— Brother Roger Schutz
Founder of Taize

"A space illuminated by candlelight, enhanced with elements of beauty — perhaps an icon, the resonance of rhythmic chants and scriptural reading, then a deep immersion into silence — these are the components of a Taize (pronounced tay-zay) prayer service, in which the whole is a communal spiritual celebration greater than the sum of its parts.

"The word Taize is the name of a village near Cluny, France, that houses a community of brothers founded by Brother Roger Schutz during World War II.

"Then twenty-five years old, Brother Roger found in Taize a house for sale that he could use to shelter a Christian community as well as to protect Jews and other refugees hiding from the Nazis. The story is told that when he found the house, an old woman who lived in Taize asked him to stay there because the townspeople were so isolated. Brother Roger heard in the woman's plaintive request the voice of God speaking to him — and today the Taize community that he founded consists of approximately one hundred brothers from twenty-five countries around the world.

"Simplicity is the guiding principle behind the Taize prayer service; in a conscious attempt to welcome all people to its practice, the format of the service is kept uncomplicated. Perhaps for this reason, many churches in America — of various denominations — now offer Taize prayer to their congregations. Yet the simplicity of the service allows for it to be adapted to any environment, including a person's home. The key to practitioners' spiritual experience is not the place, but the repetition of simple songs and phrases and the attendant silence. For those who practice Taize, its deliberate simplicity is a powerful tool for accessing the Divine.

"Writes Taize's founder, 'Extensive knowledge is not important at the outset. In time that will be of great value. But it is through the heart, in the depths of themselves, that human beings begin to grasp the Mystery of Faith. Everything is not granted at once. An inner life is developed step by step. Today, more than in the past, we enter into the faith by going forward in stages.' In addition, Brother Roger writes, 'Prayer expressed in song remains one of the most essential expressions of our search for God. Short chants, repeated over and over, emphasize the meditative quality of prayer. They express in a few words a basic truth which is quickly grasped by the mind and gradually penetrates in one's whole being.'

"Accordingly, in a Taize prayer service, one sings — often a cappella — simple chants of one or two lines; since the music is the prayer, these chants are repeated over and over. They are sometimes sung in French, Spanish, Latin, or German, and sometimes accompanied by musical instruments such as a flute or violin, but it is the very repetition of the chants that serves like a mantra to invite a meditative sense of altered — or altared — time and dimension. The service usually includes readings from the psalms and the Gospels, prayers of intercession, and a period of deep silence, lasting anywhere from ten to twenty minutes.

"Much of Taize prayer partners with symbolism; the candles that light the service illustrate the light of Christ's love that is present even in a metaphorical darkness.

"And the keeping of silence, precious enough as a respite from our rapidly paced worlds, is also a reminder that words are inadequate for expressing the deep desire we hold in our hearts and souls to be in the presence of God.

"Pope John XXIII called Taize 'the little springtime in the Church'; today, pilgrims from all over the world, of every age and background, come to the Taize community to experience its singular form of prayer. The brothers of the Taize community, who pray three times a day, are self-supporting through their own work; Brother Roger calls them to 'be filled with the Spirit of the Beatitudes: joy, simplicity, and mercy.'

"Again, the power of symbol is also applied to the community itself, as Brother Roger wants the Taize community to be a symbol of hope — 'a spirituality of celebration' and 'a parable of communion, where people seek to be reconciled every day.' And, as befits a tradition that was founded during the fighting of a costly world war, when entering the Church of Reconciliation at Taize, one sees a sign that reads, 'Let all who enter here be reconciled, brother with brother, sister with sister, nation with nation.'

Suggestions for Beginning the Exploration

"• Experiment with adding elements to make your prayer space beautiful — depending on your faith path, you might want to add a standing cross or other religious representation, flowers, or candles." 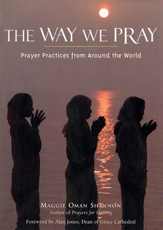