By Ai-Jen Poo, Ariane Conrad
Ai-Jen Poo on how Hollywood needs more positive portraits of elders in movies and TV.

"What images and stereotypes come to mind when we think of growing old? There are certain faces we easily generate: the ample-figured grandmother baking cookies for her grandkids, the wise widow who remembers what younger generations have forgotten, the elder statesman who advises his younger colleagues, even the man who sleeps under the overpass, or the lonely woman at the nursing home yearning to share her stories with anyone, and more. We might not think about Eve, the eighty-two-year-old surfer in Malibu, or the fact that many older actors are at the peak of their careers, experiencing new visibility with age and grace. How do we think about our elders, or do we think about them at all? Does the way we think of aging make us terrified of reaching old age ourselves?

"As for caregivers, do we picture them as competent, bright individuals who navigate the complex terrain of family dynamics with sensitivity and humor? Or do we think, as Marlene and Erlinda said, that they just 'clean toilets' and 'wipe ass'? Do we consider them professionals? Do we even think of them at all? Do we appreciate our family caregivers — our mothers, sisters, grandmothers, fathers — for their hard work and sacrifice? Would we encourage our youth to pursue a career in caregiving?

"In order to achieve a future with dignity, we must achieve a profound cultural shift in how most Americans feel about aging and care. That involves joining the national conversations in the news and in advertising, online, in films, and on TV and radio, all of which "affect how young people anticipate their future and how they interact with older people, and on the other hand, influence the way older people participate socially and evaluate their potential and limitations," according to the International Longevity Center. Since boomers are the first generation of Americans who grew up with television — witnessing historic events like the moonwalk, the Vietnam War, and the assassinations of John F. Kennedy and Martin Luther King Jr. there — they are particularly influenced by what television says about aging. (Or by what it doesn't say: elder characters and actors, especially those over the age of eighty, are so underrepresented they're nearly invisible.)

"Hollywood and the mainstream media are already beginning to reflect a sea change in how we understand aging, intergenerational relationships, and caregiving. Probably the single most effective product to come out of Hollywood in terms of turning around the cultural stereotypes about older women was the hugely popular and successful television show The Golden Girls in the late 1980s and early 1990s. Those four women, each with her own distinct history and personality (Blanche! Rose!), shattered the silence and the invisibility around aging in the most hilarious and endearing ways. It's high time someone takes up the mantle and continues telling vibrant, complex stories about older people, especially in a world where there are more elder consumers of culture than ever before. I think of the scene in The Best Exotic Marigold Hotel, where a group of British retirees converge on a retirement property in India, and luminous older actor Judi Dench's character proclaims, 'This is a new and different world. The challenge is to cope with it. Not just cope but thrive.'

"Our new stories about care and aging must be told so that many different kinds of people can relate to them on an emotional level. We need more complex, diverse elder characters and caregiving characters. As we depict more older people and caregivers, we will be able to see the world through their eyes. Removing their invisibility will be a huge relief for younger and middle-age adults also, who consciously or unconsciously are plagued with unease about their own late years." 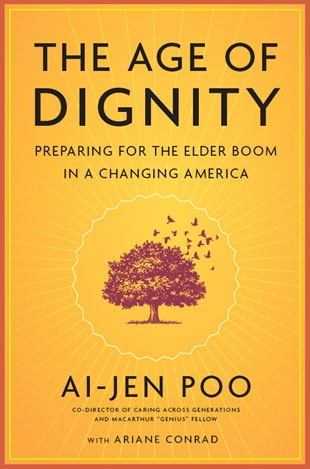