Lotus in the Fire The Healing Power of Zen

By Jim Bedard
An inspiring testament about the benefits of spiritual practice as a supportive tool and a key to healing.

This extraordinary book is both a treasure and a triumph. It is an inspiring testament to the ways in which rigorous spiritual practice can help us deal with acute suffering, pain, fear, and death.

In 1995, Canadian Jim Bedford at age 42 was diagnosed with acute myeloid leukemia and told that he had ten days to live. Twenty-five years of practicing Zen enabled him to greet this terminal illness with gratitude for whatever teachings it would bring. Bolstered by his Buddhist understandings of suffering, impermanence, being present, and compassion, he began a series of treatments including chemotherapy, gallbladder surgery, radiotherapy, and a bone-marrow transplant.

Bedford's description of months of medical interventions read like a diary of pain written on a rollercoaster ride of hope and depression. Throughout it all he relied on the love and support of his wife and four children, his spiritual teacher Sensei Sunyana Graef, his birth family, and the chanting services and other ceremonies held for him in Zen centers across the world. His view of karma made it possible for him to see his ordeal as a chance to square off against stubborn self-reliance, impulsiveness, perfectionism, attachment, and fanaticism. And the leukemia is now in remission. Lotus in the Fire proves the benefits of spiritual practice as supportive tool and a key to healing. 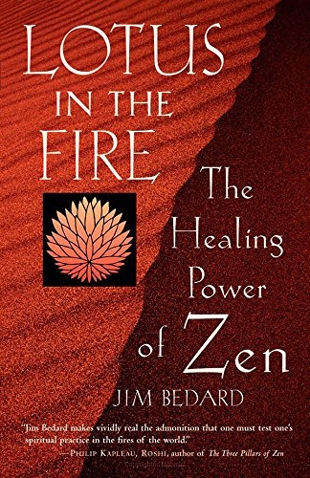