By Dianne L. Oliver, Dorothee Soelle
A soul-stirring collection of essays, poems, and meditations on peace, justice and mysticism.

Dorothee Soelle (1929 - 2003) was a German theologian who came of age during the rise of Nazi Germany and World War II. A professor of theology at Union Theological Seminary from 1975 to 1987, she embraced mysticism and saw justice and peacemaking as its natural expression in a world reeling from consumerism, economic inequities, ecological trauma, and global chaos. In a well-rounded introduction to this collection of Soelle's essential writings, Dianne L. Oliver notes:

"Not one to be as concerned about organized religion as about living out God in the world, Soelle's brand of radical Christianity finds connections between mystical experience and political activism, between suffering and resisting the status quo. . . . She insisted that being Christian meant one needed to stand against the war in Vietnam and was adamant that any theology that allowed soldiers to work in the gas chambers of Auschwitz and still go to church on Sunday must have some serious problems. Soelle called for a democratization of mysticism because experience of God is available for all and cannot be holed up in cathedrals or church dogmas. Like many others whose lives of the spirit are inspirational, Soelle seemed to have encountered and lived out God in ways that questioned much of what we accept as 'given' about our world. Her critiques of capitalism, consumerism, nuclear arms buildup, Vietnam, and Christian theology that created the space for Auschwitz were all scathing."

This robust collection of writings is divided into three sections: A Different Experience (Power and Mysticism); A Different Journey (Suffering and Resistance); and A Different Language (Poetry and Prayer). Soelle always put the accent on experience. For example, she finds the question "Do you believe in God?" to be superficial and off the mark. A more appropriate query would be "Do you live out God?" In another essay, the liberation theologian commends Judaism for the idea of human beings as the image of God, which she takes to mean we can act like God: "Just as God made clothes for Adam and Eve, we can clothe the naked. Just as God fed Elijah through a raven, so to we are to feed the hungry."

One of our favorite pieces in this paperback is a poem in which Soelle points out the many ways of praying: 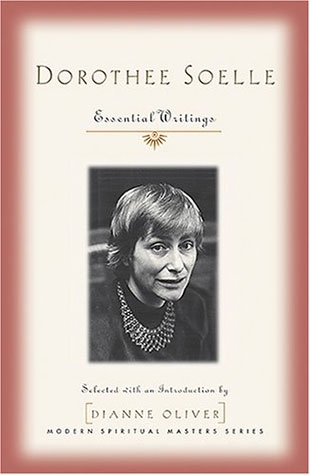