By Dov Peretz Elkins
The values of the Talmud explained by a master meaning maker.

Rabbi Dov Peretz Elkins, a lecturer, educator, and author, is rabbi emeritus of The Jewish Center of Princeton, New Jersey, and a former member of the committee on Jewish Law and Standards of the Rabbinical Assembly and the Council for Jewish Education. He has written widely for the Jewish and general press. In this authoritative volume, Elkins shines a light on the Talmud and the values cherished and enacted by the rabbinic sages of the past. Here is Jewish wisdom in a wide variety of arenas. Thematic sections include:

Elkins makes it clear from the outset that according to the ancient Rabbis, the ethical takes precedence over everything else in Judaism: "Helping a neighbor, providing food for the hungry, giving clothes for the needy, and offering assistance with a life-cycle event — such as a birth, a wedding or a burial — are the mark of the religious person in Judaism." The seat of moral behavior is the heart, and it is a good thing to "lead a life that sparkles with sweetness, compassion, integrity, and honor." Here are a few aphorisms from the Talmud that Elkins ponders:

• "One must not put any food in one's mouth until the animals have been fed."
Gittin 62a

• "Who are the greatest of all heroes? One who turns an enemy into a friend."
Avot d'Rabbi Natan 23:1

• "Whoever shames another in public is like one who sheds blood."
Bava Metzia 58b

The last one is an especially poignant one given all the reality television shows which revel in the chance to shame and humiliate individuals. Elkins notes: "Shaming a person leaves an indelible scar. A physical wound may heal in time, but a wound on the soul is less likely to fade and heal. Perhaps it all goes back to the biblical notion of the worth of a human being. We humans are made in the image of God, and any diminution of someone created in the image of God is no different than demeaning God. Preserving the dignity of a fellow human, whatever the effort and cost, is always considered worth the endeavor. No child of God should be subjected to an act of shame or humiliation by a fellow human being." This is a good example of the incisive commentary offered by Elkins, a master teacher of Judaism and a grand meaning maker. 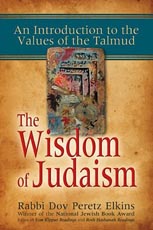