The Words of Desmond Tutu

By Naomi Tutu
A sturdy and substantive collection of quotations by Desmond Tutu.

When Desmond Tutu received the Nobel Peace Prize in 1984 for his work on behalf of blacks under apartheid in South Africa, he joined a distinguished band of spiritual heroes including Mahatma Gandhi, Martin Luther King, Jr., and Mother Teresa. This inspiring collection of quotations from his speeches and writings were selected by his daughter Naomi, who has written the introduction. The book also contains the full text of his acceptance of the Nobel Peace Prize as well as an updated chronology charting his most recent work. The quotations are divided into sections on:

Here are a few samples of his words:

• "Stability and peace in our land will not come from the barrel of a gun, because peace without justice is an impossibility."

• "An authentic Christian spirituality is utterly subversive to any system that would treat a man or woman as anything less than a child of God. It has nothing to do with ideology or politics. Every praying Christian, every person who has an encounter with God, must have a passionate concern for his or her brother or sister, his or her neighbor. To treat anyone of these as if he were less than the child of God is to deny the validity of one's spiritual experience."

• "Africans believe in something that is difficult to render in English. We call it ubuntu, botho. It means the essence of being human. You know when it is there and when it is absent. It speaks about humaneness, gentleness, hospitality, putting yourself out on behalf of others, being vulnerable. It embraces compassion and toughness. It recognizes that my humanity is bound up in yours, for we can only be human together." 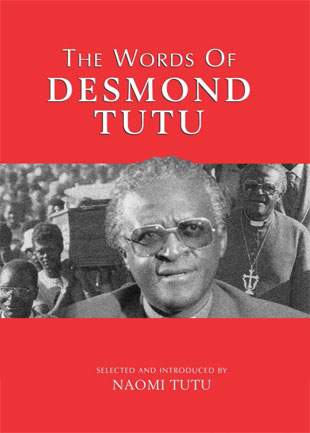