By Marc Bekoff
A convincing exploration of why we should care for and share with animals.

Marc Bekoff is a biologist who specializes in cognitive ethnology (the study of animal minds) and behavioral ecology. He is the author or editor of some 20 books. With Jane Goodall, he cofounded Ethnologists for the Ethical Treatment of Animals and wrote with her The Ten Trusts: What We Can Do to Care for the Animals We Love. In this cogent and enlightening paperback, Bekoff presents what he calls the ABCs of animal well-being and protection; his motto is "Always Be Caring and Sharing." He notes:

"Because of our dominant position in the world, because we can freely speak and express our feelings about animals, who do not have much say in the matter, it might seem as if animals exist for humans to use in any way we choose. However, ethical values tell us that animals should not be viewed as property, as resources, or as disposable machines who exist for human consumption, treated like bicycles or backpacks. Just because we can exercise power doesn't mean we have to do it; we have a choice."

Bekoff makes the point that animals have their own lives and their own points of view: "They are splendid beings in their own right, who have evolved alongside us as co-inheritors of all the beauty and abundance of life on this planet." Anyone who has lived with companion animals knows that they have feelings. After presenting some guiding principles that should characterize our relationships with animals, the author lists some questions to ponder deeply.

Here are some of the subjects covered in this wide-ranging paperback:

• Making Decisions About Animal Use
• Animal Sentience
• Animal Rights and Animal Welfare
• Utilitarianism
• Species, Individuals, and the Reintroduction
of Wolves
• Zoos, Wildlife Theme Parks, and Aquariums
• Should Humans Interfere in the Lives of Animals?
• Alternatives to Eating Animals
• Poisons, Eye Shadow, and Fur
• Dissection and Vivisection
• Where to Go from Here

Bekoff concludes by repeating the 12 mantras or principles for the future, cowritten with Jane Goodall. The last one, which he calls "a millennial mantra," is: "When animals lose, we all lose. Every single loss diminishes us as well as the magnificent world in which we live together." 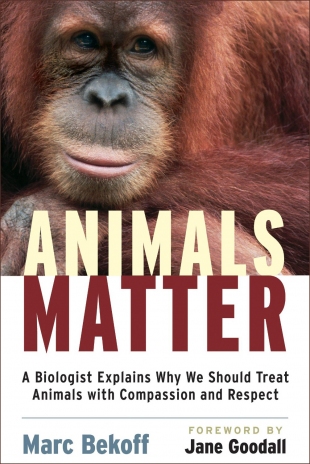