The Open Road The Global Journey of the Fourteenth Dalai Lama

By Pico Iyer
A thought-provoking assessment of the life and work of the Dalai Lama.

When asked who he is, the Fourteenth Dalai Lama usually responds that he's just "a simple monk." Pico Iyer, a veteran travel writer and explorer of contemporary globalism, has been in conversations with him for more than three decades on a half dozen continents. He sees him as a much more complex person: the Fourteenth Dalai Lama is the head of the Tibetan people who lives in exile in India; he is an incarnation of a Tibetan god; he is the winner of the Nobel Peace Prize; he is head of one of the major schools of Buddhism, a scholar, teacher, and administrator; he is a best-selling author; he is a dedicated man of science who is constantly learning; and he is a dedicated monk who meditates several hours every day. Iyer describes the Dalai Lama as a "hyperrealist" who believes in the transformation of life on earth not in some other realm. "Forget about the next life," the author once heard him say. "This very life should be useful to others. If not, at least do no harm."

In many of his books and lectures, the Dalai Lama comments on how the world is getting smaller and we are all now challenged to heed the oneness of humanity. Iyer quotes him as saying:

"Now humanity is becoming more mature. We notice a larger number of humanity really showing a desire for peace. Many people are fed up with bloodshed and violence. Now we need more effort to nurture that kind of trend."

Iyer puts the Dalai Lama alongside Vaclav Havel, Desmond Tutu, and Nelson Madela as agents of change in a world deluged with wars, entrenched hatreds, and rampant fear. He concludes:

"A monk is one who sees things in the largest light possible, who sees, that is, how much we can't see, with our limited, partial view, our perspective from our spot in the middle of the flux and chaos. His job, in some respects, is to mix agnosticism with faith: to recall that he knows nothing of what will come tomorrow, and yet to remain confident that it will have meaning and will fit into a larger logic." 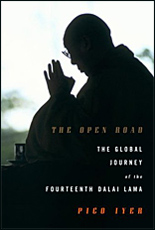