Acedia & Me A Marriage, Monks, and a Writer's Life

By Kathleen Norris
An incisive and edifying memoir and meditation on acedia, a debilitating condition of the soul.

"Acedia may be an unfamiliar term to those not well-versed in monastic history or medieval literature. But that does not mean it has no relevance for contemporary readers. . . . I believe that such standard dictionary definitions of acedia as 'apathy,' 'boredom,' or 'torpor' do not begin to cover it, and while we may find it convenient to regard it as a more primitive word for what we now term depression, the truth is much more complex. Having experienced both conditions, I think it likely that much of the restless boredom, frantic escapism, commitment phobia, and enervating despair that plagues us today is the ancient demon of acedia in modern dress." This observation comes from Kathleen Norris, the award-winning poet and author of The Cloister Walk, Amazing Grace: A Vocabulary of Faith, and Dakota: A Spiritual Geography. A popular speaker and editor at large at The Christian Century, she is an oblate of Assumption Abbey in North Dakota. She divides her time between Hawaii and South Dakota.

In this profound book, Norris shows how acedia, which was once viewed as a terrible scourge that affects the soul, has now become acceptable, and in certain circles, even fashionable. The desperate yearning for escape from the tedious present moment and the need for novelty are driven by the powerful engines of our consumerist culture which compels us to constantly want something new, better, and different. In this context, repetitive tasks are considered boring and unimportant. Taking care of ourselves, our intimate relationships, and our environment take second place to our quest for self-indulgence.

Norris first came across acedia in the writings of Evagrius Ponticus, a fourth-century monk who described it as "the noonday demon." She notes that at its Greek root, the word means the absence of care:

"When life becomes too challenging and engagement with others too demanding, acedia offers a kind of spiritual morphine: you know the pain is there, yet you can't rouse yourself to give a damn. . . . Caring is not passive, but an assertion that no matter how strained and messy our relationships can be, it is worth something to be present with others, doing our small part. Care is also required for the daily routines that acedia would have us suppress or deny as meaningless repetition or too much bother."

Norris was caught in the grip of acedia when she was an adolescent even though she didn't know about the term at the time. It manifested itself in her life as sloth, a boredom with repetition, and an eagerness to value the future over the present moment. But the desert monks had another strategy. No escape; just perseverance. Norris quotes the story of an abba who took a piece of dry wood and told his disciple: "Water this until it bears fruit." She uses this as a lead-in to the challenge given her to nurture a marriage over a span of 30 years and to keep up the discipline of writing and revising for even longer.

With riveting honesty, Norris writes about the many struggles in her life with her husband David, a poet afflicted with alcoholism, mental breakdowns, and a catastrophic series of illnesses. She discusses their battles with depression and provides a thoughtful assessment of how this malady is different from acedia. Caring, perseverance, and repetition become saving graces in her marriage. Whether probing The Noonday Demon: An Atlas of Depression by Andrew Solomon, looking at Soren Kierkegaard's understanding of despair, or pondering John Bunyan's The Pilgrim's Progress, Norris reveals an openness to the ways in which others have dealt with difficulties that constrict the soul.

Over the years, the author tries to stave off the constant temptation of acedia in her writing career. She confesses:

"As a writer I must begin, again and again, at that most terrifying of places, the blank page. And as a person of faith I am always beginning again with prayer. I can never learn these things, once and for all, and master them. I can only perform them, set them aside, and then start over. Beginning requires that I remain willing to act, and to summon my hopes in the face of torpor."

As a caring wife, as a creative author, and as woman of faith, Norris is taught by the words of the desert fathers who had an antidote to acedia — being truly present to the tasks and responsibilities of everyday life: "The monastic endeavor, now as in the fourth century, is to purify one's heart so as to better reflect God's creation." Norris concludes the book with a top-drawer collection of quotations on acedia. It is a fitting finale to her incisive and edifying treatment of this pesky condition of the soul. 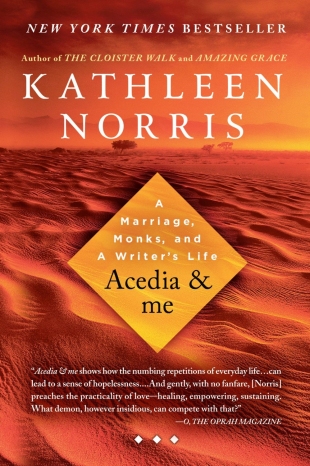