Why Faith Matters God and the New Atheism

"Faith is where we stand in the universe, not an idea that is checked off in the truth or illusion column. Losing one's faith is stepping off the planet to find oneself spinning in a new orbit," writes David Wolpe, a senior rabbi at the Sinai Temple of Los Angeles, California. He teaches at UCLA, regularly writes for many publications, is the author of six previous books, and has appeared in television series on PBS and A&E. At age 12, he lost his faith and for a decade after was angry at God's absence, baffled by the suffering of good and kind people, and aggravated by those who used religion as a weapon against other people. Having been in a place of disbelief, Wolpe feels qualified to answer the harsh criticisms of those who have written bestselling books proclaiming the benefits of atheism.

The author contends that religious people believe in an intangible reality, respect the mystery at the heart of the universe, and are not ashamed to ask questions about everything. He acknowledges that "religion begins in wonder, flourishes in relationship and is realized through living with an awareness of holiness." Wolpe disputes the idea that religion is animated by fear and explained by evolutionary psychology. Faith is more complex in its expression: it is seen in visiting the sick and praying with them; it is seen in worship where people gather together in praise of God; and it is seen in service of the poor or in other religious observances.

One of the major charges against religion is that it lies behind conflict, hate, and war. Wolpe takes a hard look at the cruelty that has been unleashed in the name of ideals, and it is not pretty. Nonetheless, he decides:

"The deepest experience of God has never been in conquest but in compassion, community, holiness and humble goodness. Inside of every human being is a battle against the pettiness and malice that thread through our character. The battle is often lost but religion, at the very least, knows that it must be fought, and should be fought, each day of our lives."

In the closing chapters, Wolpe hits high stride. First, he looks at the false war between science and religion with commentary on evolution, genes, and altruism. Then he examines the worth of religious teachings about the image of God, free will, evil, faith in shadow times, and the practice of prayer. Wolpe's accounts of his medical emergencies gives emotional clout to these meditations. He cites surveys and concludes that:

"On balance, religion increases social stability, enabling people to live happier, more productive and better lives. That does not demonstrate religion's truth. It does remind us, however, that we are creatures designed to flourish — to heal and to help — when we believe."

Wolpe makes a good case for religion and faith that is neither blind nor bigoted. Devotees of science and all its powers and zealous fanatics who murder in God's name argue that their ways can transform the world. The author chooses another path:

"Only faith that understands human frailty and human nobility, that believes holiness is not separate from compassion, offers the possibility of a path out of the wilderness." 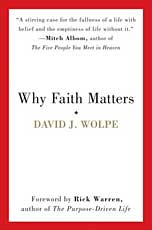