By Rob Brezsny
An imaginative tour of our friendly universe where play, optimism, and hope abound.

Rob Brezsny has written Free Will Astrology, the most widely syndicated feature in North America's alternative weeklies, for years. He is a truth-seeker, a buoyant optimist, a true believer in love and optimism, a child at play in the wonderland of life, "a master of rowdy bliss," and a writer whose imagination is wild and untamed. Pronia Is the Antidote to Paranoia is a revised and expanded edition of the radical and life-changing manifesto he wrote in 2005. With great zest and an inimitable creativity, Brezsny sees the present moment as the perfect moment:

"In the New Earth we're creating, we need lusty compassion and ecstatic duty, ingenious love and insurrectionary beauty. We need radical curiosity and reverent pranks, voracious listening and ferocious thanks."

Instead of the gloom and doom message which is so prominent in the media, Brezsny suggests "the cause of zoom and boom." Throughout this extraordinary book, he celebrates many of the qualities we have incorporated in our vision of Spiritual Literacy: imagination, wonder, gratitude, reverence, play, beauty, compassion, connections, mystery, and more. Instead of a negative and toxic view of the world, Brezsny contends that the universe is basically friendly. This means we don’t have to live our days in paranoia; we can choose instead to align with pronia: "a mode of training your senses and intellect so you're able to perceive the fact that life always gives you exactly what you need, exactly when you need it."

He hopscotches even further: "Evil is boring. Cynicism is idiotic. Fear is a bad habit. Despair is lazy. Joy is fascinating. Love is an act of heroic genius. Pleasure is your birthright. Receptivity is a superpower." Proving his point in an awesome segment in the book titled "Glory in the Highest," Brezsny presents a few of the everyday miracles which we overlook, the positive qualities we possess in abundance, the special wonders of this age, and the varied gifts and services provided by strangers we do not even know.

There's a common perception that tales of carnage, revenge, horror, mayhem, and tragedy are more real and engaging than stories of triumph, liberation, and reconciliation. Brezsny's Beauty and Truth Laboratory proclaims that succumbing to pop nihilism propagated by the media is toxic for our spiritual health and well-being. Instead of watering the seeds of violence within yourself, take a break and savor the joy of a small moment of silence or pleasure. "Bow down to the greatest mystery you know." Or "pick blackberries naked in the rain."

In The Pronia News Network, Brezsny delivers up a treasure trove of quips, quotes, snippets, and epiphanies for all of us who are sick and tired of all the bad news that surrounds us and threatens to sink us in a sea of despair. Here are bits and pieces from Brian Swimme, Gandhi, Pierre Teilhard de Chardin, Krishna Das, Ken Wilber, Emily Dickinson, and many more positive voices with good news to share.

We were also mightily impressed by the many informal and creative spiritual practices suggested in the paperback. Here are a few examples:

• "Take an inventory of the extent to which your "No" reflex dominates your life. . . . Retrain yourself to say "YES" at least 51 percent of the time."

• " 'There are two ways for a person to look for adventure,' said the Lone Ranger, an old TV character. 'By tearing everything down, or building everything up.' Give an example of each from your own life."

• "Salvador Dali once staged a party in which guests were told to come disguised as characters from their nightmares. Do the reverse. Throw a bash in which everyone is invited to arrive dressed as a character from the most glorious dream they remember."

There are many other essays and probes in this endlessly inventive work that we haven't even mentioned in this brief review. Suffice it to say, this is a rollercoaster ride that surprises, entertains, and edifies in equal measures. It is the perfect resource to lift your spirits and send you on your way rejoicing! 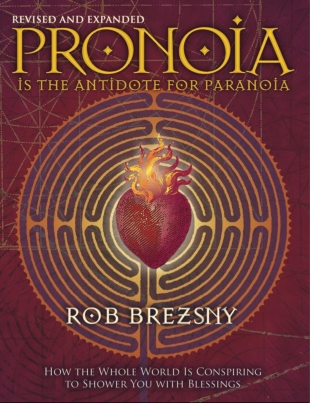