By Jim Wallis
A clarion call to use the economic crisis as a transformational moment to rediscover values that matter to us and to renew family, community, religion, public life, the economy, and government.

"The 2008 - 2009 economic crisis presents us with an enormous opportunity: to rediscover our values — as people, as families, as communities of faith, and as a nation. It is a moment of decision we dare not pass by. We have forgotten some very important things, and it's time to remember them again," writes Jim Wallis, president and CEO of Sojourners, where he is editor in chief of Sojourners magazine. Profiled as one of our Living Spiritual Teachers, he is a renowned speaker and preacher, public theologian, and international commentator on religion and public life, faith, and politics. Wallis has written eight books including God's Politics: Why the Right Gets It Wrong and the Left Doesn't Get It.

The collapse of Wall Street and the rise of "the Great Recession" have spawned the loss of millions of jobs, countless home foreclosures, the destruction of saving and retirement accounts, and the dashing of dreams for many Americans. Yet Wallis sees this as a transformational moment where we can change our ideas and ideals about money and possessions, wealth and power, credit and responsible financial choices, lifestyle and stewardship, generosity and justice. Instead of asking the question "When will this crisis be over?" we should be asking "How will this crisis change us?"

Wallis is convinced that we must reject the reigning idol of the market which has replaced the practice of citizenship with the rituals of consumption. He observes: "Those who question the market 'god' are called heretics and lunatics and are burned at the stake on conservative talk radio." The results of this idolatry: swelling ranks of the unemployed; strained food banks, church pantries, and soup kitchens; growing numbers of homeless men, women, and children; and the expansion of "the poor" which consisted in 2008 of 39.8 million people.

Wallis blames the moral malaise on the widespread acceptance of three maxims which have replaced old virtues:

(1) Greed is good (conspicuous consumption).
(2) It's all about me (narcissism).
(3) I want it now (immediate gratification).

Each of these has fed the voracious engines of consumerism and the habit of living beyond our means while amassing incredible debt. They have also led to the egregious chasm dividing the upper class and superrich from the middle-class and poor. The top 1 percent now controls over one-third of the nation's wealth, more than the entire bottom 90 percent combined. Or put another way: "Four hundred people holding more wealth than half of the whole country is a disparity over which we should indeed despair."

But instead of despairing, the author offers old values and moral perspectives to replace these troublesome maxims. For guidance Wallis looks to the Jubilee tradition from Judaism, the wisdom of the Early Church Fathers, the prophetic messages of Reverend Billy's Church of Stop Shopping, and others. He suggests replacing "Greed is good" with "Enough is enough" replacing "It's all about me" with "We're in it together"; and replacing "I want it now" with making our choices today in light of the interests of seven generations forward.

Here are some of the changes that Wallis suggests and they all make good moral sense:

• "Spending money we don't have for things we don't need is a bad foundation for an economy or a family."

• *"The values of commercials and billboards are not the things we want to teach our children."

• "Care for the poor is not just a moral duty but it is critical for the common good."

• "The operating principle of God's economy says that there is enough if we share it."

The author closes this clarion call for a rediscovery of our values with material on a clean-energy economy, a new definition of work, seeing service as a vocation, a new emphasis on the commons, and a conversation about the transformation of government. Wallis revisits his hometown of Detroit, which has lost 300,000 people since the 1980s, and finds signs of hope. He also comments on the bailout of the richest financial giants in the economy. He concludes with a very helpful and thoughtful list of 20 moral exercises for those who want to see a change in themselves and in the way that we do things in America. They are divided into sections: personal and family; in the community; money, work, and politics; and grow the changes.

Jim Wallis is a national treasure and a bold spokesperson for those on the Christian path who care deeply about the intersection between faith, spiritual practice, public life, and politics. 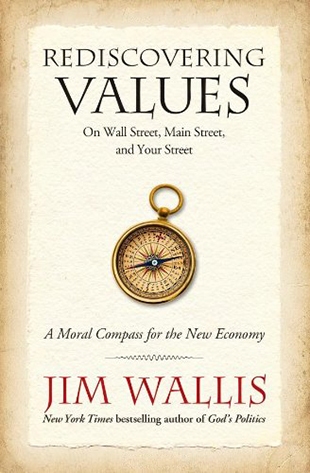