We Feel Fine An Almanac of Human Emotion

By Jonathan Harris, Sep Kamvar
A playful and sometime profound look at the soulscape of emotions in the lives of ordinary people in this age of the Internet, blogs, and social networking.

Human emotions have provided philosophers, scientists, educators, and religious leaders with an ever-expanding field of possibilities. We have moved well beyond the old ideas that we are enslaved by them, overwhelmed by them, or exhausted by their war with reason. Now many explorers of emotion are willing to admit that they are mysterious; others agree with Jean-Paul Sartre who called them "magical transformations of the world."

Whatever your view of the emotions you will be interested in We Feel Fine: An Almanac of Human Emotion. The authors are Sep Kamvar, a computer scientist and professor of computational mathematics at Stanford University, and Jonathan Harris, a systems designer and visual artist whose projects have been showsn at the Museum of Modern Art and elsewhere. They wrote a script to crawl blogs and save any sentences with "I feel" or "I am feeling." The result is that over a four-year period they have gathered some 12 million feelings posted on English-language Internet blogs.

Then in May 2006. Kamvar and Harris set up www.wefeelfine.org, a website which has won national acclaim. This database adds more than 10,000 new examples of expressed feelings every day! In so doing, it provides an endlessly fascinating soulscape of contemporary emotions. For example, if you go to the "Interactive" section of the site and click on one of the particles, up pops an excerpt from a blog post posted in the last few hours. There are multiple sorts available (feeling, gender, age, location, date, etc.), giving you a fascinating sampling of what the world is feeling right now. The authors write: "The web of machines has become a web of people, rich with emotion, relationships, love, and flaws, just as nuanced and complex as the people who make it up."

This playful and sometimes profound resource blends computer science with psychology, pop culture with philosophy, and storytelling with cultural criticism. It is the perfect book to page through at random or to use to track down things of special interest to you. There are spreads devoted to 50 feelings, 13 cities, 10 topics, 6 holidays, 5 age groups, 4 weather conditions, and 2 genders. Here are some of the tidbits you will find in this book:

• The average female blogger expresses a wider range of emotions than the average male does.

• As we grow older we feel closer to the people around us.

• Americans express their feelings about sex less than any other English-speaking country.

• People most commonly attribute the feeling of fear to losing love.

• Fear and anger decrease with age.

The book can be read on the www.wefeelfine.org website, but it's so visually interesting and so packed with fascinating information, we're sure you'll want to have a copy on your coffee table or right next to your computer as you are blogging, tweeting, Facebooking, browsing, or otherwise connecting with people around the world. 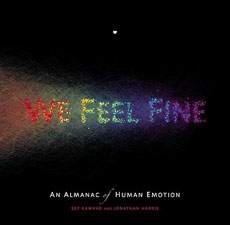