The Happiness Project Or, Why I Spent a Year Trying to Sing in the Morning, Clean My Closets, Fight Right, Read Aristotle, and Generally Have More Fun

By Gretchen Rubin
Lively observations, insights, and practices from a year-long exploration of happiness and its impact on our lives.

Gretchen Rubin is the author of several books including the bestselling Forty Ways to Look at Winston Churchill and Forty Ways to Look at JFK. She began her career in law and was clerking for Supreme Court Justice Sandra Day O'Connor when she realized that she really wanted to be a writer. Rubin is married, has two small children, and lives in New York City. One April day, she was struck by the thought that she was in danger of wasting her life. So she decided to begin a Happiness Project involving a blog, charts, deliverables, to-do lists, and evaluations of all scientific studies and books on the subject. She decided to focus on a different topic each month of the year. In addition, Rubin complied her Twelve Commandments (including Do it now, Lighten up, No calculation, and There is only love) and Secrets of Adulthood (It's okay to ask for help, Happiness doesn't always make you feel happy, It's important to be nice to everyone, and What you do everyday matters more than what you do once in a while).

In January, Rubin decides to write about her efforts to "Boost Energy" through more sleep, better exercise, clearing away clutter, tackling a nagging task, and acting more energetic. Her overriding goal: to increase her vitality so she can effectively take on the new challenges of the Happiness Project. In February, the author deals with marriage and titles the subject: "Remember Love." She comes up with the following self-improvement tasks: quit nagging, don't expect praise or appreciation, fight right, no dumping, and give proofs of love. Rubin even reports on the results of a Week of Extreme Nice to her husband of eleven years.

For the rest of the year the author chooses monthly focuses: March (Work), April (Parenthood), May (Leisure), June (Friendship), July (Money), August (Eternity), September (Books), October (Mindfulness), November (Attitude), and December (Happiness). Rubin spices the text with sprightly quotes and vignettes from her life. By the time she reaches August and the theme of "Contemplate the Heavens," she is ready to read memoirs of catastrophe, keep a book of gratitude, and imitate a spiritual master — noble spiritual practices which can lead to feelings of elation or happiness. Rubin's lengthy consideration of the "Little Way" of St. Therese of Lisieux is fascinating. 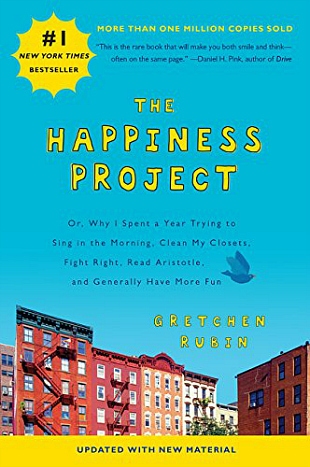