By David Abram
How using our animal senses connects us to the Earth.

"This is a book about becoming a two-legged animal, entirely a part of the animate world whose life swells within and unfolds all around us. It seeks a new way of speaking, one that enacts our interbeing with the earth rather than blinding us to it. A language that stirs a new humility in relation to other earthborn beings, whether spiders or obsidian outcrops or spruce limbs bent low by the clumped snow. A style of speech that opens our senses to the sensuous in all its multiform strangeness," writes David Abram, a cultural ecologist and environmental philosopher named by Utne Reader as one of one hundred visionaries transforming the world. He received a Lannan Literary Award for The Spell of the Sensuous which has become a classic in environmental literature.

Abram's bold work sets forth a clarion call for "a rejuventation of our carnal, sensorial empathy with the living land that sustains us." Becoming Animal provides a thought-provoking and imaginative roadmap to this spiritual adventure.

For centuries the world of the senses was considered a fallen, derivative realm superseded by Heaven. In our times, according to Abram, this disparagement of the carnal world remains, only it is technology rather than heaven that is doing the superseding. In a series of pungent chapters, Abram plunges us into the animal body as our chief instrument of our knowing, rather than the intellect. There are fascinating examinations of shadows, houses, gravity, and visual depth. Our favorite is on "Wood and Stone." To most people a rock is utterly inanimate, whereas to a person alive to her animal senses, it is "first and foremost another body engaged in the world." Abram would have us envision our flesh and the rock as two very different ways of being earth:

"You are silent, puzzling. I see you gaze back at the rock face now, questioning it, feeling the looming sweep of its bulk within your torso, listening with your muscles and the quiet composition of your bones for what this old, sculpted presence might wish to add to the conversation. I watch you lie back upon the stony soil, giving yourself to the shelter of the overhanging sandstone, inviting the cool embrace of its shadow. Water drips near your face. The stillness, the quietude of this rock is its very activity, the steady gesture by which it enters and alters your life."

Abram sees the earth as the very body of wonder and as such it demands respect and reciprocity. The more time we spend staring at screens, the more detached and alienated we become from the other beings around us and involved in "the upwelling creativity in the land itself." The interplay between our animal senses and the weather is beautifully played out in a chapter titled "Mood." The author's encounters with sea creatures prove to him that they can communicate without words, through movements and sounds. Our indigenous ancestors had oral cultures that included wisdom on the expressive magic of animals and even trees. In an enlightening section on "The Discourse of the Birds," Abram muses on the various calls of these feathered ones and the miracle of flight. After reflections on shapeshifting and other adventures among indigenous people, the author closes with a lament over the spread of literacy and its dire effect of separating us from the natural world. But Abram has hope; he heralds the vitality and the validity of the animal senses as our best access to the cosmos. 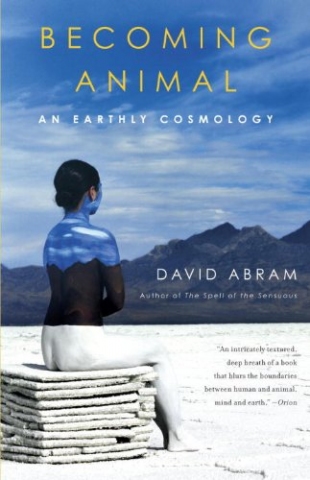 David Abram on our connection to the Earth