Nine Lives In Search of the Sacred in Modern India

By William Dalrymple
Creative portraits of nine religious men and women in contemporary India who are pursuing alternative paths, far from the engines of progress and development.

The staggering acceleration of development and modernization in India has catapulted the country's economy to nearly the third largest in the world. In Nine Lives William Dalrymple, the author of six acclaimed works of history and travel, has chosen to focus his attention on "a collection of linked nonfiction short stories, with each life representing a different form of devotion, or a different religious path. Each life is intended to act as a keyhole into the way that each specific religious vocation has been caught and transformed in the vortex of India's metamorphosis during this rapid period of transition."

The result is a very special book that opens our eyes and hearts to the exotic and astonishing diversity in India's hothouse of spirituality.

Prasannamati Mataji is a Jain nun whose life is very austere and built around the ascetic practice of giving up attachments. She eats very slowly since it is required that no winged insect, ant, or other living creature might have fallen into her food. If she finds anything, she must reject the entire meal and go on a fast. Avoiding all acts of violence is a major practice for the Jains. Mataji's companion had tuberculosis and decided to starve herself to death. Although she is still young, Mataji has made a decision to follow in this path of ritual suicide.

For three months a year, Hari Das is a dancer who plays the roles of various deities in Hindu festivals. Going into a trance and becoming a god happens during a period of spiritual intoxication. The rest of the year, he works as a digger and jail guard. An even more precarious life is that of Rani Bai, a member of the ancient profession of the devadasis — those who have been dedicated, or "married," to a god or goddess — who once worked in temples but now are forced to operate out of their homes. Instead of fighting Christian missionaries and Hindu reformers, these women, who see sex with as many as eight men a day as their sacred work, do battle with AIDS. Dalrymple's other portraits include a shaman who is a "hereditary singer" of an ancient epic poem, a Tibetan monk who went against his tradition to fight the Chinese and now is in exile, a Tantric worshipper of the goddess Tara, a blind Baul (wandering singer), and a Sufi "lady fakir," who worries about rumors that conservative Muslims in Pakistan will destroy Sufi mosques and holy sites.

Dalrymple does not offer commentary, opinions, or judgments about these nine religious practitioners. The book includes a comprehensive glossary of terms, a bibliography, and index, making it an excellent resource. 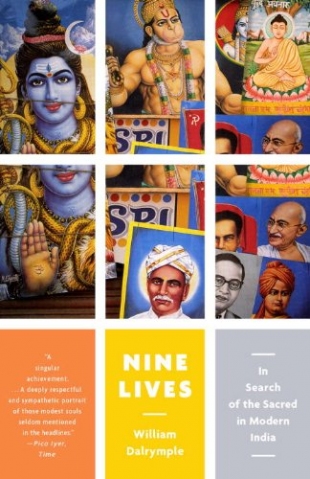