By Jon J. Muth
An enchanting introduction to Zen for young children.

Addy, Michael, and Karl are astonished when they discover a panda named Stillwater sitting in their backyard with an umbrella. The next day Addy goes to the panda's house for tea, and he tells her a Zen story about a robber who is given much more than he expects from the man he is robbing.

The next day, Michael meets Stillwater in a tree and hears a story about a farmer whose troubles lead to good fortune. Michael concludes: "Maybe good luck and bad luck are all mixed up. You never know what will happen next."

Finally, the panda meets with little Karl and they frolic in a swimming pool after which Stillwater tells him the story of a monk who can't let go of something he has seen. The little boy who has been angry with his brother is obliged to let go of his bad feelings and forgive him.

Author and illustrator Jon J. Muth has fashioned a classic children's book with exquisite visuals; the cover is of the panda balancing precariously on the pointed roof of a house. He also has given us glimpse of Zen that vividly catches and conveys the startling perspectives of this path. While some may feel that the stories told by Stillwater are beyond the ken of children four through eight years of age, we're sure that Muth would respond that he'd rather see them stretch than rest in a safe harbor of familiarity. Zen Shorts is a Caldicott Honor Winner. 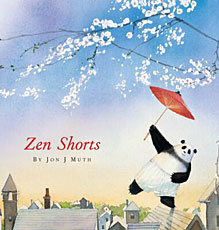