Beyond Forgiveness Reflections on Atonement

By Phil Cousineau
A top-drawer collection of 15 essays on understanding and practicing atonement as an act that makes amends and repairs harm.

Long ago, Heraclitus said: "Forgiveness is better than revenge." Yet down through the ages, revenge and retaliation have been the approach taken for everything from personal disputes to the propaganda used to send soldiers into battle. As film and book critics we have seen and read too much about revenge and hatred, vile approaches to others that stab at the heart of the spiritual wisdom about forgiveness and compassion. Phil Cousineau, the prolific author of 25 books and one of S&P's Living Spiritual Teachers, has written the preface and edited this top-drawer collection of 15 essays on the understanding and practice of atonement — "an act that rights a wrong, makes amends, repairs harm, offers restitution, attempts compensation, clears the conscience of the offender, relieves the anger of the victim, and serves justice with a sacrifice commensurate with the harm that has been done."

The authors of these essays explore how atonement can be put into action within our court systems, international negotiations, business transactions, and personal relationships. Cousineau points out that the background for this process of restorative justice has been played out most visibly in the Truth and Reconciliation Commission hearings in South Africa. Archbishop Desmond Tutu has said of this process:

"This kind of justice seeks to rehabilitate both the victim and the perpetrator, who should be given the opportunity to be integrated into the community he or she has injured by his or her offense."

Cousineau closes his foreword with a list of movies dealing with atonement including The Mission, Verdict, Kite Runner, and Gran Torino. There are pieces on forgiveness as spiritual liberation by Michael Bernard Beckwith, the wisdom of atonement by Jacob Needleman, the struggle for atonement by Michael N. Nagler, at-one-ment or becoming whole by Diane Hennacy Powell, rituals and ceremonies of atonement by Kate Dahlstedt, forgiving the other and forgiving the self by Katharine Dever, and a Twelve-Step approach to atonement by Anonymous. The second section of the book consists of stories of atonement by Edward Tick, Michael Lerner, Arun Gandhi, and others. In the closing essay, James O'Dea writes:

"However you do it, standing fearlessly in your own light is the essence of creative atonement. Indeed, to do so requires us to overcome fear, conditioned responses, and perhaps shame. These elements can sucker us into surrendering our power to the status quo. Creative atonement overturns the status quo; it steps into a power that was held back and an affirmation of worthiness that may have hidden itself from its fullest and most beautiful expression." 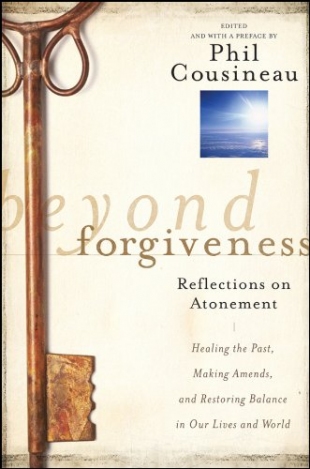