The Global Soul Jet Lag, Shopping Malls, and the Search for Home

By Pico Iyer
A dazzling collection of essays on the anxieties of living in a borderless world.

Pico Iyer's multicultural upbringing as an Indian, an American, and an Englishman makes him a perfect tour guide through a world of fusions and confusions. He feels right at home with the one million refugees who cross borders every day. He rubs shoulders in his international travels with ex-patriots, executives, and nomads of all types. They all partake of the "global soul" where everywhere is made up of everywhere else. The borders between here and there are collapsing but strangely enough more people than ever have no real sense of home. The world is shrinking yet we feel cut off from this unity. "Our ads sing of Planet Reebok and Planet Hollywood — yet none of us necessarily feels united on a deeper level."

Iyer, who had an article in the Best Spiritual Writing of 1999, is a brilliant analyst of the contemporary world and all its postmodern developments. In this dazzling collection of essays, he opens our eyes to the anxieties rife in our borderless world. His piece on Los Angeles International Airport conveys this milieu as "an international convenience zone" where people still feel exposed, vulnerable, and anxious. A phantasmagorical essay on Hong Kong explores this city as "a kind of Platonic Everyplace, the city-state as transit lounge." He salutes Toronto as a multicultural masterpiece of urban living that manages to be civil, exciting, peaceful, and agreeable. There are also insightful essays on Atlanta as Olympic host and London.

Iyer quotes Huston Smith: "Daily the world grows smaller, leaving understanding the only place where peace can find a home." The cosmopolitan author finds a bit of serenity, beauty, and restfulness in the middle of rural Japan where he lives part of the year. He finds small pleasures in a place that is "half strange and half strangely familiar." 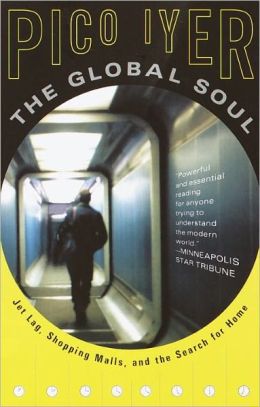