By Robert Thurman
A bright and beautifully illustrated introduction to Tibetan Buddhism.

Here is a bright and beautifully illustrated introduction to Tibetan Buddhism by Robert A. Thurman, one of the country’s foremost scholars on this spiritual path. In the introduction, he calls Buddhism "a system of education, a process of individual discovery that leads out of the habitual world of ignorance, unconsciousness, and suffering. It is a critique of all belief systems rather than a pattern of beliefs."

He begins with listings of the Four Noble Truths, the Eightfold Path, the Twelve Interdependent Causes that Drive the Life Cycle, the Three Poisons, and the Six Realms through which beings Wander Life after Life. Concerned about future possibilities, Tibetan Buddhists are very serious about spiritual practices such as pilgrimage to holy places, prostration, and prayer. One devotional tool which is present everywhere are wheels of prayer which are described as "ornate wheels containing scrolls of millions of these (Om Mani Padme Hung — a compassion-jewel in wisdom-lotus-amen) prayers, which they incessantly turn by hand."

Thurman provides brief and incisive definitions of taking refuge, dharma, sangha, mantra, mandala offering, guru yoga, the holidays of the enlightened civilization, and death and reincarnation in the tulku system. A glossary of terms is provided in the back of the book.

What makes Inside Tibetan Buddhism stand apart from others like it are the outstanding color photographs of rituals, sacred places, art, people, and everyday life. 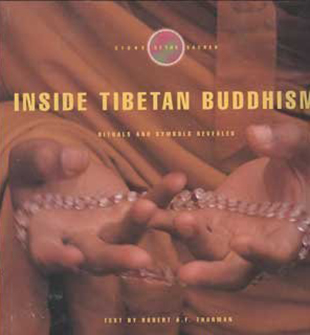