By Jean-Bertrand Aristide
A compassionate treatise on behalf of the poor.

"Wherever the poor are heard and respected," writes Jean-Bertrand Aristide, Haiti's first democratically elected president, "the face of God is illuminated." In this letter on behalf of the poor of his poverty-stricken country, the leader, who is also a priest, notes that one percent of people control 45 percent of Haiti's wealth. Eighty-five percent of the population cannot read and write. And over 500,000 children, mostly young girls, live in Haitian households as unpaid domestic workers — carrying water, cleaning house, doing errands, receiving no salary and no schooling.

The poor in Haiti are part of the more than 1.3 billion people in the world who live on less than one dollar a day. We read about the unprecedented economic growth in the United States and forget that 3 billion people — half the population of the world — live on less than two dollars a day. To make things worse, globalization is having dire effects on the poor's peasant economy. Aristide discusses the eradication of the Haitian Creole pig population in the 1980s as one example. Hearty local pigs were killed with the promise that better pigs would replace them; however, the peasants found they could not afford to raise the new stock from Iowa, which needed pure drinking water and imported feed. To really help the poor, Aristide calls for the creation of more local collectives, the establishment of literacy programs, and the participation of all people in the process of democracy.

Eyes of the Heart is a wake-up call for those who haven't got a clue about the victims of the forward-charging global economy. Aristide sees the gap between the rich and the poor as a moral crisis of staggering proportion and one that must be addressed promptly: "Behind this crisis of dollars there is a human crisis: among the poor, immeasurable human suffering; among the others, the powerful, the policy makers, a poverty of spirit which has made a religion of the market and its invisible hand. A crisis of imagination so profound that the only measure of value is profit, the only measure of human progress is economic growth." With the fierce moral vision of a prophet, Aristide challenges us to see with the eyes of our hearts. 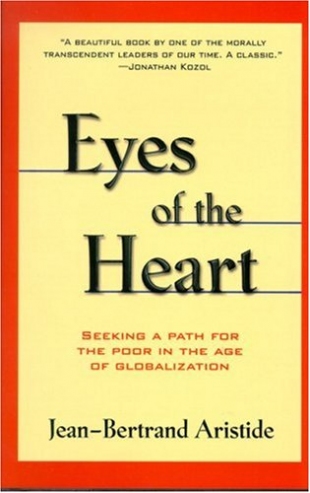