Journey to the Heart Christian Contemplatives Through the Centuries

By Kim Nataraja
A survey that opens us to a deeper appreciation and understanding of Christian mysticism.

Kim Nataraja is international school coordinator for the World Community for Christian Meditation founded by John Main, a worldwide spiritual family linked by the practice of daily prayer. She serves as editor of this survey of mysticism from Jesus (written by Laurence Freeman) to John Main (by Stefan Reynolds). According to Kallistos Ware and Andrew Louth, Clement of Alexandria took the mysticism of the early church and put a few new twists on it: namely the via negativa which brings believers to rest in awe and holy wonder.

The Desert Tradition is covered by Kim Nataraja; it was organized around prayer, silence and solitude, poverty, chastity, and obedience. She also leads the tour of the life and work of Evagrius of Pontus, a respected Desert Father who pioneered a psychological approach to achieving "purity of heart." The emotions play a major role in the spiritual life and must be cleansed. Like the Buddhists, he advised the practice of watching your thoughts. Esther de Waal and Stefan Reynolds sum up the innovative monastic regimen of St. Benedict, and June Boyce-Tillman sketches in the talents and visions of Hildegard von Bingen.

A pivotal theologian who influenced modern mysticism is Meister Eckhart (Kim Nataraja). The roll call continues with Julian of Norwich (Margaret Lane), St. Teresa of Avila (Juliene McLain), St. John of the Cross (Peter Tyler), and others until we sail into the times of the most recent mystics including Evelyn Underhill (Liz Watson), Etty Hillesum (Liz Watson), Thomas Merton (Peter Tyler), Bede Griffiths (Shirley du Boulay), and others.

This well-organized Journey into the Heart ought to open new doors for those unfamiliar with some of these mystical pathfinders. For others, it will be like visiting old friends and remembering things we have in common. 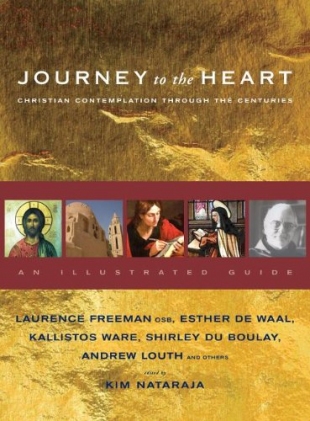