By Bruce Chilton
Expands our understanding and appreciation of the life and ministry of Jesus.

It is hard to believe that at this late date yet another scholar would be able to vastly expand our understanding and appreciation of the life and ministry of Jesus, but Bruce Chilton has done just that with this remarkable work. The author of many scholarly articles and books, he is the Bell Professor of Religion at Bard College and priest at the Free Church of St. John the Evangelist in Barrytown, New York.

Chilton uses the New Testament Gospels, ancient Jewish literature, and the Aramaic oral tradition of rendering scripture to shed new light on Jesus as a rabbi, a teacher of the Kabbalah, and a devotee of a Galilean brand of Judaism that put the accent on direct communication with God. With this multidimensional approach, Chilton pulls down many of the walls that historically have divided Judaism and Christianity. Or, as Jewish scholar Jacob Neusner puts it in an endorsement on the book's jacket, "[This] biography offers the first authentically Christian Jesus — and therefore the most profoundly Judaic Jesus ever."

I was quite impressed with the author's view that Jesus' status as a "mamzer" — an Israelite of suspect paternity — colored his life and ministry: "Such men and women lived in a caste apart, unable to marry within established bloodlines of Israel, and so were often excluded from the mainstream of Jewish life. . . . From the beginning of his life, Jesus negotiated the treacherous terrain between belonging to the people of God and ostracism in his own community." No wonder he remains today a touchstone for outcasts, losers, and rebels.

Equally interesting is Chilton's contention that Jesus sought out John the Baptist, a wilderness rabbi, as his teacher and learned from him mystical meditation practices about becoming one with God's throne. John also taught him about the connection between the Spirit and water inspired by Ezekiel. All these lessons would deeply influence Jesus, the maverick rabbi who was consciously trying to live the Torah.

Chilton opens up new doors in understanding the teacher from Nazareth in discussions of his emphasis upon purity, exorcism, and a radical new ritual where bread and wine replaced the sacrifice in the Temple. The Jewish practices and beliefs that Rabbi Jesus drew together in his unique vision eventually led to the principal characteristics of a new religion — Christianity. And it was a very unusual brew containing "the apocalyptic fervor of the Branch Davidians; the mystical disciplines of Julian of Norwich and Hildegard of Bingen; the insistence upon full immersion in water and in Spirit among the Baptists; the charismatic healing of revivalists, whether under tents or on television; the political activism of Liberation theology; the ethics of Albert Schweitzer and the compassion of Mother Teresa; the compulsive socializing over meals, whether in the formal liturgy of the Mass or in covered-dish suppers in churches all over the world." With this thought provoking and intimate biography of Jesus, Chilton makes a place in the big tent of Christianity for an eclectic and diverse group of believers and the passions that animate them.

There is much I've been unable to cover here including the author's assessments of Jesus' death and resurrection, his shamanistic healings, his lifelong distrust of religious authority, his acceptance of women as disciples, and his shadow side — an antipathy toward non-Jews that he consistently tried to overcome. Suffice it to say, this is a fascinating look at one of the most important religious leaders of all time. Check it out for yourself. 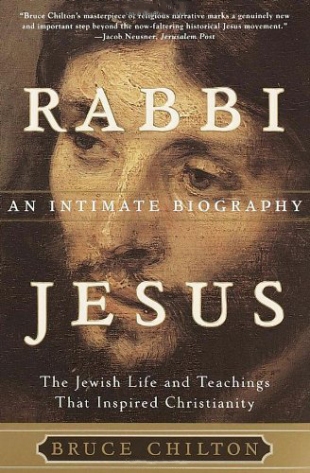