Life Together The Classic Exploration of Faith in Community

By Dietrich Bonhoeffer
A Christian classic on community, the ardor of devotion, the gift of grace, and the goal of service to others.

Dietrich Bonhoeffer (1906-1945) received his doctoral degree from the University of Berlin at age 21. After living in Barcelona, Spain, and in the United States, he returned to the same university in 1931 as a lecturer in theology. Bonhoeffer, as a Lutheran, helped organize the Pastor's Emergency League against the Nazi regime and was a leading spokesperson of the confessing church. He actively participated in the German resistance movement and was arrested and hanged after being implicated in the 1944 assassination attempt on dictator Adolf Hitler.

In 1935, Bonhoeffer created and led a secret seminary in Finkenwal for training young men for ministry. Although the seminary was shut down in two years, this experiment in "life together" has inspired Christians around the world with its devotional ardor, its Christ-centered emphasis, its ethical imperative of being our brother's keepers, and its celebration of the bounties of Christian fellowship.

Bonhoeffer melds the practices of personal prayer, worship in common, work, and service to others. Other practices which are important to him are table fellowship, singing, intercession, Bible reading, and the confession of sin. The end result of all this is people of God who are committed to the ministry of listening, active helpfulness, and bearing with others. 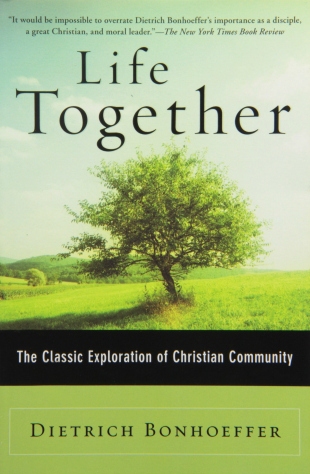