Occupy Spirituality A Radical Vision for a New Generation

By Adam Bucko, Matthew Fox
A profound prophetic dialogue across generations about a radical spirituality that honors both contemplation and social action.

In conjunction with the two-year anniversary of the Occupy Movement, North Atlantic Books and Andrew Harvey's Sacred Activism Institute are launching the Sacred Activism Series with Occupy Spirituality: A Radical Vision for a New Generation by Adam Bucko and Matthew Fox.

Its mission statement reads: "When the joy of compassionate service is combined with the pragmatic drive to transform all existing economic, social, and political institutions, a radical divine force is born: Sacred Activism. This series presents leading voices that embody the tenets of Sacred Activism — compassion, service, and sacred consciousness — while addressing the crucial issues of our time and inspiring radical action."

Occupy Spirituality is a consciousness-raising, prophetic, and bridge-building book. It is structured around a cross-generational dialogue between Adam Bucko, a 37-year-old spiritual activist and mentor to homeless youth, and Matthew Fox, a 72-year-old theologian and bestselling author of 30 books who is also featured at Spirituality & Practice as a Living Spiritual Teacher. In their quest for peace, justice and freedom these two radicals map out where we have been and what must be done in our times to reunite contemplation and action and assure our sustainability as a species.

Bucko and Fox share the stories of their spiritual journeys and invite readers to "occupy their conscience." They describe an emerging spirituality that is open and inclusive as it aims to transform our culture. In a valuable section on the spiritual path of vocation, they discuss how important it is for people to tap into their God-given talents, to set aside ego and put others first, and to nurture interfaith exploration.

There can be no deep or lasting change without committed spiritual practice, which serves as the grounding of sacred activism and the path into a viable future. Spiritual renewal then leads to the formation of new directions for economics and for community. This paperback ends with a celebration of poet Walt Whitman's ideal of "spiritual democracy," which during these strained and hard economic times, registers on our exhausted minds, bodies, and souls as a divine elixir.

More About the Authors:

Adam Bucko grew up in Poland during the 70s and 80s under a totalitarian regime. At the age of 14, he joined an anarchist youth movement and by the time he arrived in the United States, it was clear to him that his life's work would be "helping to create positive change in my community and the world."

His experiences in a Hindu-Christian hermitage in India helped shape his other calling to be a contemplative in the world. Along with Taz Tagore, Bucko founded the Reciprocity Foundation serving homeless youth and empowering them to "break the cycle of poverty." Since 2004 they have worked with nearly 1,000 youth. Bucko's other path is the establishment of HAB, an interspiritual contemplative fellowship focused on training young people in radical spirituality and sacred activism. Along with Rory McEntee, he wrote "New Monasticism: An Interspiritual Manifesto for Contemplative Life in the Twenty-First Century."

Matthew Fox believes that spirituality means "living life fully and courageously." He battled polio as a child, did his doctoral studies in Paris, and was for 34 years a Catholic priest in the Dominican Order; he was expelled from the Order by Cardinal Ratzinger for teaching liberation theology anc creation spirituality. He is known as well his radical defense of women's rights, gay and lesbian rights, eco-justice, and social justice. His attack on the dualism of body versus soul, matter versus spirit, and those who possess the truth versus those who are lost left him with a "life on the margin."

Fox has since become an Episcopal priest. He lifts up the values of creation spirituality, Native American spiritual practices, deep ecumenism, and art as meditation. He has been organizing experiences known as the Cosmic Mass for 16 years as a means of recovering worship again.

According to Bucko and Fox, a new spirituality is emerging which is energizing young and old alike — they call it "occupy spirituality," and it has seven characteristics. Number one is that it is deeply ecumenical, interspiritual, and post-traditional. It starts from life and is both experiential and contemplative. Its practice goes beyond traditional devotional exercises to encompass all activities including relationships and everyday activities. This emerging spirituality emphasizes the importance of incarnating one's special gifts in service of compassion and justice. It puts the accent on joy, sensuality, celebration and heartfelt aliveness. It is activated by discernment and animated by a democratic and dialogical way of being. And finally, this new spiritual path is meant to be lived out in communities which "serve life and humanity."

Both Bucko and Fox share their spiritual practices with the former talking about Conversational Prayer, Silent Meditation, the Prayer of the Name, Lectio Divina, Sacred Body Practices, Shadow Work, and Spiritual Friendship and the latter adding to the mix work, psychology, study, creativity, praying the news, and more. This focus in the book brings both words in its title to life. We sense what it really means to really occupy our lives through attention to our many connections to the Divine, and we understand the blessings a spiritual life brings to a commitment to service and action.

• Transforming Anger
"What Howard Thurman and Mahatma Gandhi and Martin Luther King Jr. teach us is that it is possible and necessary to steer anger into useful protest and authentic change."
— Matthew Fox

• Hope
"Hope is a verb with the sleeves rolled up."
— David Orr

• Acts of Rebellion
"Any act of rebellion, any physical defiance of those who make war, of those who perpetrate corporate greed and are responsible for state crimes, anything that seeks to draw the good to the good, nourishes our souls and holds out the possibility that we can touch and transform the souls of others."
— Chris Hedges

• God's Call
"Just as we are all meant to be contemplatives and to hear the voice of God in our lives, we are all meant to answer God's call to be His partners in transfiguring the world. This calling, this encounter with God, is always to send us into the midst of human suffering."
— Archbishop Desmond Tutu

• Rituals
"I find that when we create rituals that speak to young people on our retreats, it results in real miracles. Things that normally would take years to heal and process get taken care of in one ceremony."
— Adam Bucko

• An Economy That Serves
"So that, to me, is really the number one question in economics today. Can we create an economy that serves, that benefits everybody? And 'everybody' being not just the two-legged creatures, but all the other creatures too, because we're here together. This kind of reinvention has to happen at ground level, in small communities."
— Matthew Fox

• Life Teachings
"Even though I tend to identify as a Christian, I realize that most of my teachings actually come from life directly, and then I relate it to Christianity because this way it gives me context. But the transmission itself comes from life, so to speak."
— Adam Bucko

• Finding a New Spirituality
"I believe that we must find, all of us together, a new spirituality. This new concept ought to be elaborated alongside the religions like secular ethics in a way that all people of good will would adhere to it."
— His Holiness The Dalai Lama

If You Like This Book, You'll Also Want to Read:

Living the Questions: The Wisdom of Progressive Christianity by David M. Felten and Jeff Procter-Murphy (HarperOne, 2012

Spiritual Ecology: The Cry of the Earth by Llewellyn Vaughan-Lee (The Golden Sufi Center, 2013)

Spirituality: What It Is and Why It Matters by Roger S. Gottlieb (Oxford University Press, 2012) 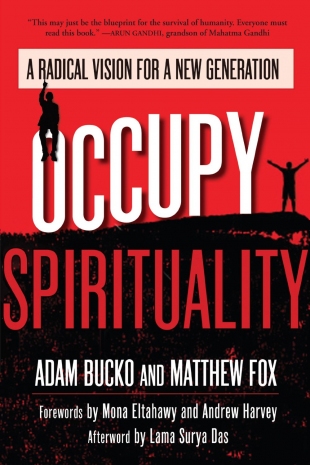