By Jim Carrey
A children's picture book about a wave who discovers that he's also the ocean and is interconnected with all of life.

Roland is a wave who is born deep in the ocean. Rolling along, he makes friends with some dolphins, until a big ship cuts him off from them. After an encounter with a whale, he feels lonely and afraid. A big wave called Gnarly sucks him up and they capsize a sailboat.

Things take a turn for the better when a sea bird introduces Roland to a wave named Shimmer (because "up on her crest, the sun made her glimmer like he liked her the best.") The two waves roll on together making ripples as they go. But then Roland learns some distressing news: waves end when they reach the sand. What will happen to Roland and Shimmer?

So far this story is one that many young people will readily identify with: making friends and even finding a special one, plus the fear of being alone. But this story doesn't leave things there. It takes a mystical turn as Roland and Shimmer discover after breaking on the beach: "They didn't feel different just bigger somehow, like the fish were all swimming inside of them now." The waves are now the ocean — interconnected with all the water at the poles, in the rivers, and the streams and the pools and the sinks. It's like the mystic poet Rumi says:

"Listen, O drop, give yourself up without regret,
and in exchange gain the Ocean.
Listen, O drop, bestow upon yourself this honor,
and in the arms of the Sea be secure.
Who indeed should be so fortunate?
An Ocean wooing a drop!
In God's name, in God's name, sell and buy at once!
Give a drop, and take this Sea full of pearls."
[Mathnawi IV, 2619-22, The Pocket Rumi,
translations by Kabir Helminski]

This children's picture book is written by Jim Carrey, the actor/artist known for his Golden Globe Award-wining performances in Man on the Moon and The Truman Show, such popular comedies as Ace Ventura: Pet Detective, Dumb and Dumber, and Bruce Almighty, and the family classics How the Grinch Stole Christmas and Lemony Snicket's A Series of Unfortunate Events. He is also an Honorary Founder of the Global Alliance for Transformational Entertainment. His first children's book is aimed at those aged four to eight and the adults who love them. Roland the wave comes to life through the colorful and inventive illustrations of R. C. Nason.

This book offers us a profound spiritual lesson: we all belong, and we never need worry about not belonging. We are each part of something larger than ourselves. Roland hits obstacles during his life, but he finds a spiritual companion to help him get through them. Then he thinks it may all be over soon and everything will be lost. Observes Jim Carrey: "I think that's a common fear for children — the fear of loss. It's an early existential crisis, if you will. But when we realize that beneath the surface of things — the activities of our lives — we are all connected, all one energy, that fear of loss gets softened. At times, it disappears entirely. At least that's been true for me."

How Roland Rolls is a fun read for children and parents with its rhyming stanzas and vibrant pictures. If you've ever watched waves crashing on the shore and wondered where that water will travel next or — even better, how it feels — then this one's for you. It will help you to keep rollin' along and to encourage everyone you know to do the same! 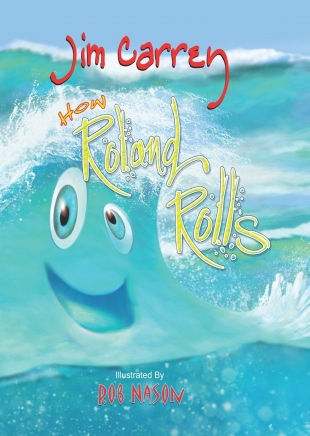