God of Becoming and Relationship The Dynamic Nature of Process Theology

By Bradley Shavit Artson
A celebration of the dynamism Process Thought can bring to Judaism.

Process Thought's way of integrating religion and science, the nature of becoming and of reality, and the forces of morality and dogma sets the themes of this wide-ranging and pensive book. First, it presents new understandings of God, creation, relationships, revelation, and death, and then it moves on to a discussion of Process Thought's impact on Judaism's views of God, the covenant, rituals and observances, the Jewish relationship to Israel, the importance of community, and the pursuit of justice.

Rabbi Bradley Shavit Artson, the author of this pioneering book, is an educator who holds the Abner and Roslyn Goldstine Dean's Chair of the Ziegler School of Rabbinic Studies and is vice-president of American Jewish University in Los Angeles. The author is impressed with the dynamism of Process Thought and the idea of our being co-creators in a world where creation is still going on! Affirming the relational emphasis of the covenant, he sees revelation as spiritual and cognitive, primal and verbal.

Artson also affirms Process Thought's integration of thought and action. Here the observance of mitzvoth as the sacred deeds of Jewish practice is given space to operate. This book celebrates Judaism as "a way of life, a philosophy, and a cultural expression of the Jewish people throughout the ages." Anyone reading this enthusiastic vision of Judaism will be swept along by the author's enthusiasm. 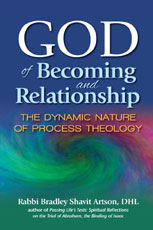