By Charles Montgomery
Reports on the humanizing redesign of cities and the rejoicing of urban dwellers who are thankful for the changes, especially the downplaying of cars.

Charles Montgomery is an award-winning journalist and author. Visit him at www.thehappycity.com for more information on this rousing and uplifting book on transforming and improving the cities we live in. He begins with the miraculous revitalization five years ago of Bogota, Columbia, which was a violent and impoverished place until Mayor Enrique Penalosa decided to turn things around. Like many other urban centers it was designed for cars and not for people. Penalosa threw out a highway expansion program and made hundreds of miles available for bikes, a new group of parks, and pedestrian plazas, plus a new network of libraries, schools, and day-care centers.

Montgomery is an enthusiastic writer and clearly delights in finding other examples of happy cities. Designers are getting rid of the "urban sprawl" caused when everything is organized around automobiles. Many urban dwellers have fled after finding that they could not afford to spend 40% of their income maintaining car(s). Car culture has also resulted in costs of billions of dollars to repair bridges and highways.

Many design triumphs are covered in the book. Here are a few.

• Home owners in Vancouver have been allowed to turn their backyard garages into cottages, and the result has been a new infusion of social life in their neighborhoods.

• The mental health of residents of Portland was improved when an intersection was turned into a public piazza.
• Large areas in New York's Times Square has been given over to pedestrians, creating happiness for tourists and businesses that can make the most of walking consumers.

• Vauban is a car-free suburb of Freiburg, Germany.

• Community life in Northern California has been given a boost by having neighbors remove fences and merging backyards into a communal space for gardening and eating together in groups. 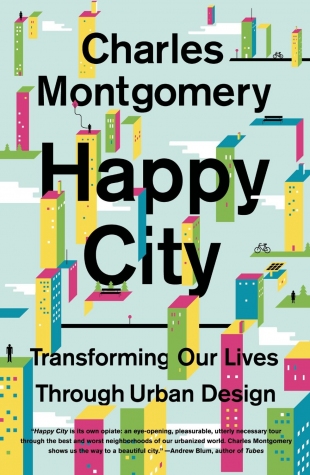