By Wayne Baker
An optimistic look at ten core values held by most Americans.

United America is based on four national research surveys of American values conducted by Baker in 2009 and 2010. Despite lots of talk about a divided nation, economic inequality, and loss of prestige around the world, Baker believes there are ten core values that a large majority of citizens still believe in. They are:

Most of these values remain ideals which have not been incarnated in the lives of ordinary Americans. Perhaps the most shocking revelation in the book is the status of returning military veterans who are the new "minority" facing homelessness, unemployment, post-traumatic stress, substance abuse, and marital problems. The fact that both political parties were willing to send these men and women to war and then leave them high and dry upon their return home is a national scandal of epic proportions! This worsening situation makes a mockery out of the notion of patriotism and many of the other values saluted in this book. 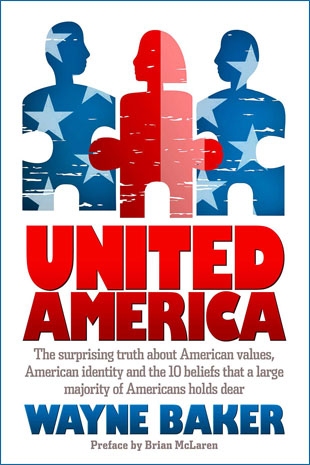