By Bradford Keeney, Hillary Keeney
An enthusiastic overview on the history, basic ideas, and daily practices of an energy practice that can transform your life.

A complaint that keeps cropping up among our circle of friends is: "I am exhausted and I just don't have as much energy as I used to have." We're not alone. It seems that people everywhere are running on empty after coping with the tensions and constant pressures of daily life in the twenty-first century.

But help is available in the form of seiki jutsu, a Japanese healing art that works with the life force energy. In their enthusiastic overview of the history, the basic ideas, and the daily practices of seiki jutsu, the inimitable Bradford Keeney (profiled as one of our Living Spiritual Teachers) and his multi-talented wife and partner Hillary Keeney present an energy medicine that is the perfect antidote for today's energy/exhaustion crisis.

Bradford Keeney was chosen as the authorized successor to Ikuko Osumi, the foremost practitioner of seiki jutso in the twentieth century. This ancient practice has been utilized in Japan beginning in the 8th century by the samurai. The tradition emphasizes that there is a vital force in all of nature — seiki — that underlies health, creative expression, the actualization of human potential, and mastery of any art.

Life is made alive by seiki, write the Keeneys, and so when seiki is depleted, a person become vulnerable to fatigue, apathy, and illness. The key to well-being and effective action is to replenish oneself with seiki through practice. The Keeneys note:

"The primary idea of seiki jutsu is that spontaneous, automatic movement of the body is a natural means of holistic tuning, which in turn enables seiki to flow unimpeded. The result is that one feels full of seiki."

Seiki is present in other healing arts, though called by different names. For example, the Kalahari Bushmen, who have recognized Brad Keeney as a healer in their tradition, call it n/om. He has seen them rejuvenate body, mind, and spirit by giving themselves up to shaking, swaying, rocking, singing, and dancing.

When we first heard about seiki, we were struck by the Keeneys' explanation that it is "non-subtle." We're familiar with subtle energy healing systems such as reiki or shiatsu. But this healing tradition is not a complicated system requiring special gifts; it thrives on spontaneity and improvisation. "Experiencing it is unquestionably obvious and so powerful that it can transform your life in an instant." Once you are infused with seiki, your energy levels surge and there is no end to the things which you can do.

The Keeneys discuss the transmission of seiki by a seiki master and how you can prepare yourself to receive it. They share stories of how they have given seiki in workshops and ceremonies. But rather than emphasize their own roles, they encourage people to recognize they can open to seiki through daily practice, including this three-part exercise:

"Step One — Initiate a body movement that has rhythm. From sitting, start a simple motion of your body, such as rocking, that turns into a vibrant rhythmic pulse.

"Step Three — Enter the seiki tuning zone. Allow the free and spontaneous expression of your body to carry you into an ecstatic awareness that is free of mind-body dualisms and associated experience. We playfully refer to this as the 'seiki tuning zone.' "

One of the unique aspects of this healing modality is that all the movements are spontaneous and not orchestrated by the seiki jutsu master. "Get soft and seiki will come" is a Keeney mantra. Another appealing dimension is that this art form optimizes and nurtures creativity as one surrenders to movement, sound, music, song and dance.

Brad shares some of his visionary experiences and with Hillary reveals the global impact seiki jutsu has had upon people of all walks of life. They offer "Life Force Theatre" workshops and a two-year mentorship program in ecstatic healing and spirituality, and other programs through the Keeney Institute for Healing which they cofounded in New Orleans, Louisiana. To learn more about these opportunities and upcoming events, visit www.keeneyinstitute.org. On their YouTube channel there are videos of seiki exercises, interviews, videos of Ikuko Osumi and the Bushmen, and more. For the latest news, "like" their Facebook page.

Seiki Jutsu ends with a conversation on "Juggling Zen, Jazz, and Seiki" where the Keeneys put on an awesome display of their wit, playfulness, insight, spirituality, and polyphonic thinking. And because they are filled with energy, it all comes across as perfectly effortless and totally natural! 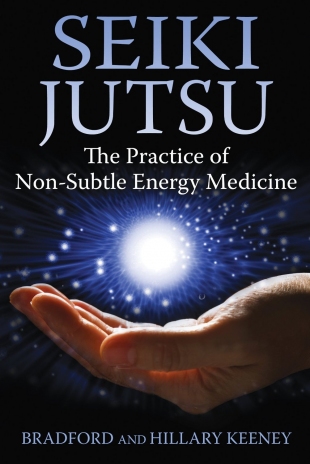