In 2009, Rabbi Zalman Schachter-Shalomi, the founder of the Jewish Renewal Movement and author of more than 60 books, who is consistently makes Newsweek's list of the 50 most influential rabbis in Americam, contacted Sara Davidson, a New York Times bestselling author of eight books, to meet with him every Friday for two years in order to explore death and other topics under the umbrella of "The December Project." She was immensely intrigued by the chance to get together with this extraordinary spiritual master who "bridges two worlds — the ancient Orthodox and the current cutting edge."

Rebbe Zalman has been a trailblazer all his life and now at the age of 85 none of the energy has gone out of his vision of the spiritual life:

• He calls his life mission "to take the blinders off Judaism."

• He affirms his belief in universalism: "It is of no consequence by what name we call God in our homes."

• His take on death: "I've been training myself since I was young for the moment I'll die."

• His comment about the aging body: "Adolescence, menopause — the changes that come about then are nothing compared to what happens to an elder."

• When he was the first in the Jewish community to lead guided meditations: "I had no peers. Others looked at me like I was nuts."

• His quest for God: "I don't have to climb the highest heavens to meet God. All I have to do is go into the sacred inner place. So let's furnish it well."

Throughout this wonderful book, Davidson adds comments on Reb Zalman's life in Poland, his fleeing from the Nazis in Austria, his becoming an Orthodox rabbi in Brooklyn, his taking LSD with Timothy Leary, his many translations of ancient prayers into contemporary knowledge, his friendships with Thomas Merton and His Holiness the Dalai Lama, his being made an honorary Sheik in a Sufi order, and his time holding the Wisdom Chair at a Buddhist university. In 2011, Reb Zalman's Legacy Project at the University of Colorado was initiated with an archive of his work that contains 1,200 audiotapes, 500 photographs, 60 books, articles, pamphlets, and 50 videotapes.

A special section called "Exercises" contains spiritual practices on a variety of subjects including giving thanks, making friends with solitude, forgiveness, when your memory fails, reviewing your life, and more. 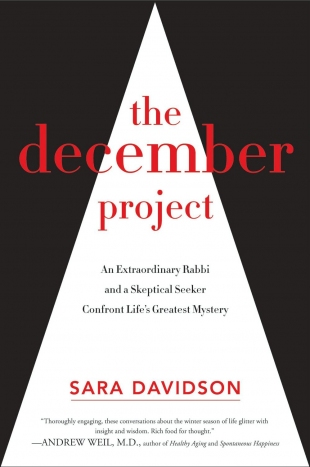