A Life of Dietrich Bonhoeffer

By Charles Marsh
A substantive and engaging biography of one of the towering 20th century Christian theologians.

Dietrich Bonhoeffer stands as one of the towering figures in twentieth-century Christian theology and a pioneer in the formation of discipleship and community. This Lutheran pastor was executed by the Nazis on April 9, 1945, for his part in a conspiracy to assassinate Adolf Hitler. In this substantive biography, Charles Marsh, professor of religious studies at the University of Virginia and director of the Project on Lived Theology, we get a vivid sense of this complex clergyman and the many changes and paradoxes in his life story.

Bonhoeffer was born into a well-to-do German family to a psychiatrist father and a religious mother. The sixth of eight children, Bonhoefer was an accomplished pianist. He decided to become a theologian at the age of 13. After several years of study at the University of Tubingen, Bonhoeffer served as a pastor in Barcelona, Spain, and during 1930 studied theology at Union Seminary in New York City. These two experiences abroad had a deep impact on Bonhoeffer. During the first, he dared to ask himself "how might the experience of God be rendered if he let the old categories fall away?" In the States, he was moved by the challenges to Christian congregations by those who were poor.

Marsh does a fine job delineating Bonhoeffer's struggle with Christian congregations and clergy who jumped on the Hitler bandwagon. As a member of the Confessing Church, he resisted this collaboration with the Nazi regime. Bonhoeffer joined the resistance in 1940 and was arrested in April of 1943. During the last two years of his life in prison, he wrote Letters and Papers From Prison. Here the Lutheran presented his vision of Christianity animated by humility, faith, and sacrifice in "a world come of age." Marsh quotes the famous last words attributed to Bonhoeffer in the hour of his death: "This is not the end for me; it is the beginning of life." 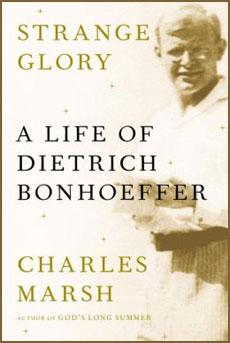