Eager to Love The Alternative Way of Francis of Assisi

By Richard Rohr
A robust and revelatory portrait of Francis and Clare.

Richard Rohr is a globally recognized Catholic teacher who focuses on the mystical and transformational traditions. A Franciscan priest and founder and director of the Center for Action and Contemplation in Albuquerque, New Mexico, home of the Rohr Institute, he is the author of more than 20 books including Yes/And . . . Daily Meditations. He is profiled as a Living Spiritual Teacher on Spirituality & Practice.

Francis of Assisi (1182-1226) and his spiritual companion Clare continue to shed light upon our times as they model a Christian way of being. There is a radiance in their love of the natural world, in their humility and poverty, and in their intimacy with God. No wonder Rohr proclaims: "The Gospel is not a fire insurance policy for the next world, but a life assurance policy for this world."

The author is irked by what has jokingly been called "birdbath Franciscanism." Instead of the saint so often depicted in garden statues, he paints a picture of Francis as a religious genius who blended the new with the old and came up with "a sidewalk spirituality, for the streets of the world, a path highly possible and attractive for all would-be seekers." Rohr also has great respect for Francis's solidarity with those suffering in the world and his empathy for all people stuck on the edge and the bottom of society.

Catholics have always been fascinated with the sacramentalism in which the world is seen as a sign pointing to God. It was Francis of Assisi who brought back into practice and focus a reverence for the natural world and all its inhabitants (animals, plants, even the stars).

What other milestones are evident in the ministry of Francis and Clare? According to Rohr, they brought fresh understanding to contemplation as a different way of knowing; they pioneered a "Third Way which is the creative and courageous role of a prophet and a mystic"; and they found ways to integrate the negative and to balance the feminine and the masculine. Rohr sees Clare's legacy as living life at depth and he marvels at St. Francis's ability to enter the world of another in his relationship with the Sultan of Egypt.

Richard Rohr, as usual, is the best resource around for understanding the life and ministry of St. Francis of Assisi. 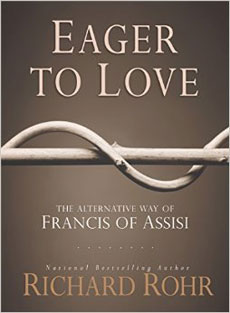 Q & A with Richard Rohr