The Impulse Society America in the Age of Instant Gratification

By Paul Roberts
A razor-sharp critique of the hedonistic, self-centered Impulse Society.

Are you fed up with the widespread putting of self-interest above the common good? Are you enraged by politics in Washington that is beholden not to the people but to special interest groups? Have you had it with the growing gap between the rich and the poor? Are you saddened by the consumer society's emphasis on the short-tern gratification of self instead of long-term goals for everyone?

Paul Roberts, author of The End of Oil and The End of Food, shares your frustration. There was a brief shining moment in our cultural history when we thought we could bid farewell to the all-American worship of individualism and the lack of interest in civic-mindedness or the greater good. But the reigning "Impulse Society," as Roberts calls it, has returned with a reverence for unapologetic materialism which is "juiced up by technology, globalization, a more mercenary business model, and a less engaged government."

Today's emphasis in consumerism is on speed (same-day delivery) and superabundance (all-you-can-eat). The result is the return of the narcissistic personality. Of course, these trends of the Impulse Society have contributed to the fall of the United States as the most advanced nation in the world. For example, in almost every category from life expectancy and infant mortality to patient satisfaction, our health care system lags behind those of other developed economies.

American culture is a repository of ideals, traditions, and imperatives for both individual well-being and the common good. Historian Christopher Lasch has written: "The culture of competitive individualism has carried the logic of individualism to the extreme of a war of all against all." Roberts agrees and calls for a pushback against the principles of the Impulse Society. "We need to leverage these individual quests for connection and community into the broad social and political actions that can protect and restore the values of community and the emphasis on larger, long-term goals. And this will only happen by acting collectively." 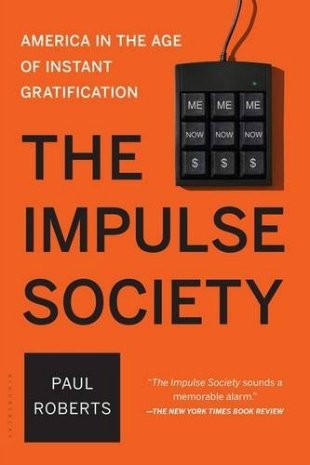