The Zero Marginal Cost Society The Internet of Things, the Collaborative Commons, and the Eclipse of Capitalism

By Jeremy Rifkin
A map of the changes that are opening the doors to the Third Industrial Revolution.

In his brilliant and prophetic 1970 book Future Shock, Alvin Toffler wrote about a new situation in American society: "the dizzying disorientation brought on by the premature arrival of the future." People were having problems adapting to the pace of change and to the social experience of transience. Job jockeying was creating nomadic families; adhocracies were about to replace bureaucracies; information was overloading our heads; and science was bringing more novelty with organ transplants, laser beams, and cyborgs. Toffler called for support systems for those overwhelmed by change, including a future-facing education system that would enable individuals to better imagine and cope with the transformations afoot in society.

Now Jeremy Rifkin has written a landmark work that can help us cope with the changes that are happening today, whose meaning most of us have been too busy to grasp. As a social theorist Rifkin makes it clear that advanced technology is already revising our allegiance to private property, our traditional notions of work, our reverence for privacy, and our understanding of education, while moving us along in transition to a global sharing economy. Rifkin, along with others, predicts that capitalism will be irrevocably changed by the middle of the 21st century.

With an impressive intensity and sense of purpose that comes across to the reader, the author presents a short history of economics before launching into an explanation of "the Internet of Things" which will "connect everything with everyone in an integrated global network. People, machines, natural resources, production lines, logistics networks, consumption habits, recycling flows, and virtually every other aspect of economic and social life will be linked." This deluge of Big Data will propel productivity and give people more free time to pursue what they want.

Of course, the downside of this projected Third Industrial Revolution is that the Internet of Things will make it possible for corporations to use all the information they have mined from your online and connected activities to generate a continuous stream of ads. With human behavior being tracked by so many devices, it will be much easier to expand the surveillance state.

Rifkin pays tribute to the emerging sharing economy (getting a car through Zipcar or renting out your spare room on Airbob). The sharing economy puts the accent on access rather than ownership. The use of Craig's List to sell things and the use of Kickstarter to fund new products and organizations are two successful models of this transition into the commons era. Rifkin sees two major obstacles: climate change and cyberterrorism.

We were especially interested in the changes already underway in education from classes in school rooms to courses online. Also there is a spiritual dimension to the structural model of unemployment where individuals will be liberated from factory jobs by robots and other technological wonders. All of us will be prosumers involved in the creation, production and sharing value of our labors. What will we do in our leisure time? This question has no meaning for us now in a 24/7 economy where we are busy all the time. Rifkin imagines a better world where conversation, collaboration, and service of others will emerge. 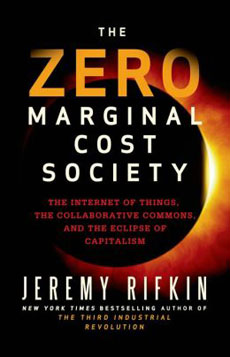