By Joanna Bourke
An incisive and shocking overview of the militarization of nearly all aspects of life in the United States.

Joanna Bourke is Professor of History at Birkbeck College, University of London, and the prize-winning author of eleven books, including histories on modern warfare, military medicine, psychology, emotions, and rape.

Bourke begins this sharp-edged work with the sentence: "We are a warring people" and goes on to reveal how military practices, technologies, and symbols are part of our daily lives. Nonfiction about soldiers and wars is one of the most popular genres and the success of violent movies such as American Sniper is just one example of how fascinated we are with war cinema. Kids are entranced by video games where the chief goal is participating in scenarios of violence, murder, and rampant carnage.

There are 310 million firearms in the United States and more than 30,000 are killed every year by guns, yet Congress has had trouble trying to pass even modest gun control laws.

Meanwhile, the militarization of American citizens continues; 1.4 million are currently on active duty. In 2010, it was reported that every year the Pentagon gives around $4 billion to universities for research support. The taxes people pay make armament manufacturers and investors very prosperous.

War walks into people's homes, dominates the media, and spreads into other arenas, including the war against terrorism and the war on drugs. Many citizens would say that the militarization of society is necessary to promote security and to insure freedom. Bourke has other ideas about warfare and military violence.

During the twentieth century wars, military experts found ways to speak about violence against others in ways that lessened the pain by making it attractive, abstract, or absent. Bourke looks at how wars affect all our lives: "Violence circulates from soldiers to civilians, from friends to enemies and from foreign nations to the heart of homelands. It poisons our local and global environments." And when the combat stops, the weapon systems we have put in place prove to be very helpful in "policing and punishing those of us at home." Check out the author's commentary on nuclear technologies, drone warfare, gas attacks, and the use of so-called non-lethal projectiles.

Some of the other topics covered in this revealing book are the inadequacy of international law in addressing war crimes and atrocities; the dark science of ballistics; and the dangers for kids playing war and violent gaming. She also exposes the tragedy of collateral damage — all the innocent lives lost as a result of wars; between 43 and 44 million non-combatants were killed in all wars in the twentieth century.

"We can stop wounding the world," writes Bourke and she is right. We can switch our allegiance from military ideologies, practices, and symbols to peace, ecology, and justice. We can choose life by becoming nonviolent in our own activities. We can give up our enslavement to violent movies, TV shows, and games. We can read authors who lift our spirits with visions of cooperative living. We can refuse to listen to those who are hostile rather than hospitable to strangers and outsiders. We can abandon the dualistic view of the world that is so central to military perspectives. We can join anti-war movements and march in demonstrations. And we can pray for our children and our children's children that they will not have to live under the pressures and insanity of war without end. 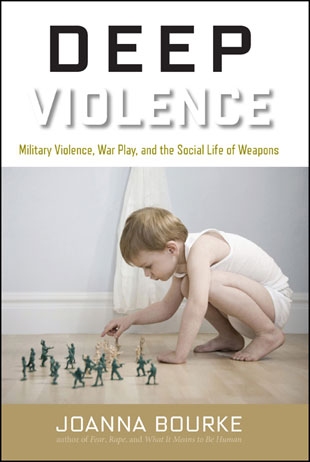