Rain A Natural and Cultural History

By Cynthia Barnett
A glorious exploration of rain and all its lessons, bounties, and mysteries.

When it starts to rain in New York City, people suddenly become more impatient, things slow down, and anger rises to the surface. Cars and taxis start honking their horns. Tempers flare as pedestrians push past each other armed with open umbrellas.

Not a pretty picture but one which becomes more understandable after reading Cynthia Barnett's incredibly creative and insightful omnibus on rain. We love single-themed books and marvel at how the authors manage to find such a breadth of material on their subjects. That certainly is the case of award-winning journalist Cynthia Barnett.

According to geologists, the first rains fell 4.2 billion years ago on Western Australia's Jack Hills. The nature writer John Burroughs sums it up rather nicely: "Sunshine abounds everywhere, but only where the rain or dew follows is there life."

Although many people are worried about climate change, they'd much rather talk about the daily weather: "Everyone loves to talk about the rain. Too much and not enough, rain is a conversation we share. It is an opening to connect--in ways as profound as prayer and art, practical as economics, or casual as an exchange between strangers on a stormy day."

To tell the ongoing story of rain, Barnett takes on an illuminating jaunt to various spots around the world: to the Olympic Peninsula, home to the Hoh Rain Forest where we learn about how various forces work together to create rain; to Seattle which is always mentioned as America's rainiest city but really isn't; to Glasgow, home of the Macintosh raincoat; and to Cherrapunji, India, which is the rainiest place in the world.

What a complicated world we live where some people are battered by monsoons and others suffer in droughts. Rainmakers have appeared throughout history and had mixed responses to their rituals. Witches were burned at the stake to stop rain, and small children in some communities were sacrificed to bring it. Barnett is intrigued by a recent record dry autumn in Israel where members of the three Abrahamic faiths gathered together to pray for an end to the drought.

The question is: Will we be able to ride out the rains like Noah and his ark or will we face death in the deserts created by droughts? Either way, people are sure to be spending more time watching weather reports and listening to meteorologists. Yet, Barnett reports that rain continues "to defy Big Data." Nonetheless, the public yearns for a deeper and richer understanding of the weather, and the best weather reporters help people understand it as "one of the most complicated and urgent stories of our time."

There are so many fascinating details and detours about rain in this book that we can only point to a few of them, such the art of listening to the rain, the creation of umbrellas, Thomas Jefferson as a lover of rain, the nightmare of floods, the manifold efforts to control the atmosphere by seeding clouds, the smells of rain, and the references to rain in literature, film and songs.

Take plenty of time to savor this astonishing book! 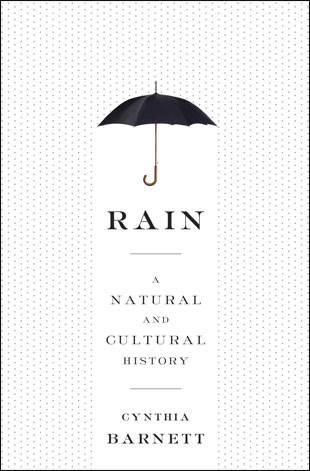