By Roland Merullo
More spiritual insights from a Mongolian monk and his questing brother-in-law.

In Breakfast with Buddha by novelist Roland Merullo, Otto Ringling, a food book editor and skeptic, sets out on a cross-country journey with Volya Rinpoche, a Mongolian monk, who is his sister's spiritual teacher and husband. This sage tutors him in the art of slowing down, being present, unlearning bad habits, and letting go of expectations.

Now in the third novel in a series, Dinner with Buddha, we pick up the relationship between these two men eight years later as they embark on another journey. Otto is in a place of transition following the death of his wife, the exit of his grown children, and the loss of his job. He is grateful to his brother-in-law for having taught him how to meditate.

The lessons continue on this trip. Under Volya's influence, Otto squares off with some of his character flaws and demons. He gives up the crutch of having a plan and learns to go with the flow, trusting the journey. He explores the implications of Volya's observation that "there's too much you in the picture." Another insight is the acceptance of worries as "the noise in the world, always there."

Volya faces his own encounters with mystery and the unknown. His bright and shining daughter Shelsa may be the next Dalai Lama. She can warm or chill herself by will, drops off into deep silences and trances, and has a special connection with birds who land on her shoulders when she sits in the yard.

On the road, the two companions meet many people, all with something to show or tell them. Volya advices:

"Don't look at people by their category – gender, race, social standing, age – but relate to them inside-to-inside, soul-to-soul, from and to that place where we're so much more alike than different."
In terms of religions, Volya singles out Sufism for praise:

"What I like, Otto, is these Sufi people they think you should be human. The full human. Not interested in special things, in big gods coming down, in special meditations, like that. They want that if you are married, you are the good husband or the wife. If you work, you do the work the right way, not the wrong way. If you are sick, you say, 'I am sick. This is part of my job now.' " Otto is such a full human, which is why we can empathize with his questions and immerse ourselves in his experiences. In the end, we are all humanized by the spiritual journey of Dinner with Buddda. 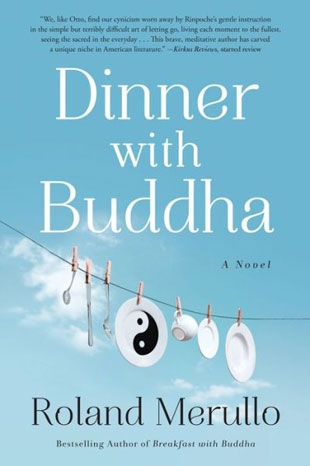