By Alan Lightman
A gifted writer's memories of his birth family and his youth in Memphis.

Alan Lightman wears many impressive hats: he is an astrophysicist and a poet, a MIT professor and author of the 1992 bestselling novel Einstein's Dreams. He grew up in Memphis and went north to college, eventually settling down in Boston. This well-written memoir charts his trip back to Memphis for his uncle's funeral. This gives him a chance to take a hard look at his birth family, his relatives, and his ancestors.

Standing head and shoulders above everyone else is M. A. Lightman, Alan's grandfather, who left behind a career in civil engineering in 1915 to open a nickelodeon and eventually become the most successful movie-theatre owner in the South. He kept the public coming to see movies at his chain because always had the latest technology and plenty of popcorn.

Lightman delves into the past with a story about his father's humiliation in World War II when he made a decision that would haunt him for the rest of his life. He recounts the stories he heard from his Jewish aunts and uncles about sexcapades and divorces. Finally Lightman shares his feelings about Memphis with its racial hatred and corruption. Martin Luther King, Jr., died there after coming to the city to support a sanitation worker's strike. It was just after this terrible event that Lightman, in college at the time, decided that he would not move back to Memphis.

Screening Room is six hours on five CDs and is read by Bronson Pinchot. 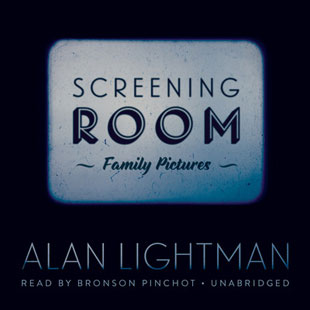