The Root of War Is Fear Thomas Merton's Advice to Peacemakers

Jim Forest, co-founder of the Catholic Peace Fellowship, is an internationally renowned peacemaker and spiritual writer. His many books include All Is Grace: A Biography of Dorothy Day,Living with Wisdom: A Life of Thomas Merton, and Praying with Icons. He is profiled in S&P's Living Spiritual Teachers Project.

Forest served as the managing editor of The Catholic Worker during the 1960s. During that time he befriended the prophetic Trappist monk Thomas Merton, who had begun speaking out against the idea of a "just" war and was advocating peace, disarmament, and nonviolence. The head of his monastic order at one point silenced Merton on the topic of war.

This book pays tribute to Merton the peacemaker though selections from his letters and other writings on war. It has an evergreen quality that will speak to the hearts of today's generations as they take up the struggle for peace and justice. Merton was an ardent believer that love and mercy were at the core of the Christian faith; he followed in the train of Francis of Assisi who as a conscientious objector opposed all killing. Merton wrote that a major ethical border had been crossed during World War II with the savage bombing of Hiroshima and Nagasaki plus the firebombing of Dresden. These destructive acts changed the nature of war forever by negating the distinction between civilian and combatant.

In a book banned by the Abbot of his order, Peace in a Post-Christian Era, Merton wrote: "I wish to insist above all on one fundamental truth: that all nuclear war, and indeed massive destruction of cities, populations, nations and cultures by any means whatever, is a most serious crime which is forbidden to us not only by Christian ethics but by every sane and serious moral code."

Contrary to prevailing views of his times, Merton affirmed the Gospel where everything revolves around love of God and neighbor. In a letter to Dorothy Day, he wrote: "Persons are known not by the intellect alone, not by principles alone, but by love. It is when we love the other, the enemy, that we obtain from God the key to an understanding of who he is, and who we are. . . . When we extend our hand to the enemy who is sinking in the abyss, God reaches out for both of us, for it is He first of all who extends our hand to the enemy."

Merton's words should turn us around and set us on a more loving path. But these unconventional thoughts about loving our enemies still strike many as sentimental and impossible. Instead, many persist in giving their allegiance to military adventures around the world. Merton has some final words for them:

"There is one winner, only one winner in war.
The winner is war itself.
Not truth, not justice, not morality.
These are the vanquished." 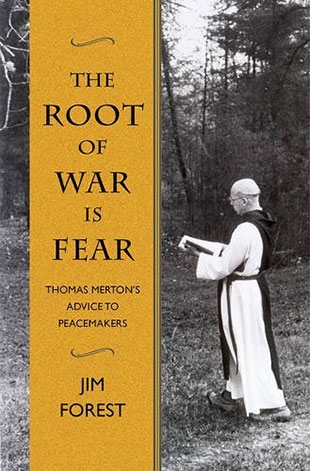