Where the Dead Pause and the Japanese Say Goodbye A Journey

By Marie Mutusuki Mockett
An exquisitely written account of a pilgrimage to Japan by a middle-aged American experiencing a whirlpool of grief.

Marie Mutsuki Mockett is an exquisite writer whose novel Piking Bones from Ash was shortlisted for the 2010 Saroyan Prize and the Asian American Literary Award for Fiction and was a finalist for the Paterson Prize. She lives in San Francisco.

This book is her poignant account of a pilgrimage to Japan in search of spiritual healing. Still mourning the death of her beloved father, the middle-aged Mockett plans to bury her grandfather's ashes at the Zen Buddhist temple run by her family.

But the island nation is in chaos after the March 11, 2011, tsunami that killed 18,000 people, destroyed villages, and left everyone in a state of shock and loss. Mockett visits places devastated by the disaster and is quite taken back when she learns that the radiation released by the Fukushima Daiichi Nuclear Power Plant could prevent her accomplishing the goals of her journey.

The author is surprised by the large number of people who share spiritual teachings about ghosts, mourning, empathy, and suffering. These soulmates enable Mockett to participate in a number of cultural and religious festivals. She does a marvelous job welcoming the beauty of the cherry blossoms in spring and the elegance of the floating lamps in the Japanese Obon ceremony to celebrate one's ancestor spirits.

Mockett spends time with Kaneta, a Zen priest who is determined to help the survivors of the tsunami. She ponders the teachings of Dogen, the father of the Soto School of Zen, along with Kukai, the founder of Esoteric Buddhism. In addition, this gifted writer shares insights about the lingering feeling among the Japanese that the country is special and that outsiders can never understand it. Mockett also manages to delve into Shinto and kami (nature spirits) who animate the modern world with their miraculous presence.

All those who savor being immersed in the language, the history, the culture, and the lore of Japan will find Where the Dead Pause and the Japanese Say Goodbye an awesome reading experience! 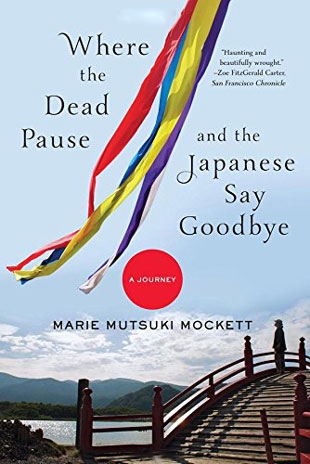