By Ahdaf Soueif, Omar Robert Hamilton
Stirring essays and poems by artists from around the world on the plight of the Palestinians.

This awesome paperback edited by Ahdaf Soueif and Omar Robert Hamilton celebrates the tenth annual Palestine Festival of Literature. It contains a stirring collection more than 50 essays, poems, and sketches by artists from around the world who are speaking out against the garish and nightmarish siege of Palestine by the Israeli military occupation. A further aim of PalFest is to reaffirm in the words of Edward Said: "The power of culture over the culture of power."

In his "Welcome" to the creative contributors, Mahmoud Darwish states:

"Life here, as you see, is not a given, it's a daily miracle. Military barriers separate everything from everything. And everything — even the landscape — is temporary and vulnerable. Life here is less than life, it is an approaching death. And how ironic that the stepping-up of oppression, of closures, of settlement expansion, of daily killings that have become routine — that all this takes place in the context of what is called the 'peace process,' a process revolving in an empty circle, threatening to kill the very idea of peace suffering in our hearts."

This eclectic batch of reports and reflections challenges us to enact the spiritual practice of connections as we explore the links between imperialism, occupation, justice, art, and freedom. It is mostly in the poems that we sense the horrors of everyday violence and the death of civilian children, the incremental genocide, the oppression of the checkpoints, and the destruction of Palestinian homes.

For example, in "This Poem Will Not End Apartheid," Remi Kanasi laments:

"We don't need another book
explaining the situation
we need a lesson plan
to stop the next bomb
from dropping.

And in a poem titled "Gaza," Sabrina Mahfouz writes:

"Let's mark walls with the blood of our tongues
to know our lives will be heard
even when they are reduced to nothing
but reddish-grey rubble. . . .

Let's stare at the sea
until similes sting our eyes
until we agree
standing on a rock older than poetry
that this land can only ever belong
to those who love.
No matter what the checkpoints say
or how loud the rockets scream
we know that love is enough
because there is nothing more
and we learned that through words
when touch was disallowed
to read me the poems as I drown
my love."

To hear the voices of these oppressed Palestinians who have endured so much pain and suffering down through the years may not seem to be enough, but these essays and poems open many emotional doors, drawing us closer to these ravaged survivors who cling to hope even though it is in short supply. 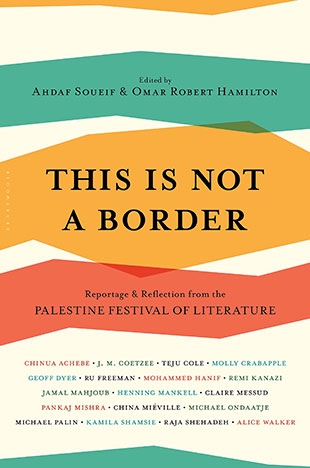