By Eduardo Galeano
Galeano’s last book in which he encourages us to sing our souls back in sync with the Earth.

Eduardo Galeano (1940 - 2015) wrote more than 30 books and brought to his creations a distinctive voice and perspective. He was the first winner of the Lannen Foundation Cultural Freedom Prize. He lived in exile in Argentina and Spain for 12 years before returning to his home country of Uruguay in 1985. We respected him and the many convincing ways he depicted the plights and tragedies of the poor, the downtrodden, and the exploited.

Hunter of Stories gathers together Galeano's last work as translated by Mark Fried. Here you will find his final reflections on history, memory. human suffering, death, and loss. The author moves gracefully from stories to fables, anecdotes, and riddles.

Like Rumi and other seers, Galeano loves birds since they are "the only free beings in this world inhabited by prisoners." They are free choosing where and when to fly “without ever asking permission of officials who believe they own the heavens.” In contrast, civilized people are so strange: “They all have watches and none of them has any time.”

We just read somewhere that Agatha Christie is the bestselling novelist in the world. Galeano salutes her talent for “unraveling a baffling crime or excavating ruins thousands of years ago.”

Much to our delight, Galeano sides with us when he pleads—

"The saying has it that man is wolf to man.
But rarely do wolves kill other wolves.
Unlike us, wolves do not seek mutual extermination.
Wolves have a bad reputation, but they are not the ones turning the world into an immense lunatic asylum and an overcrowded cemetery." 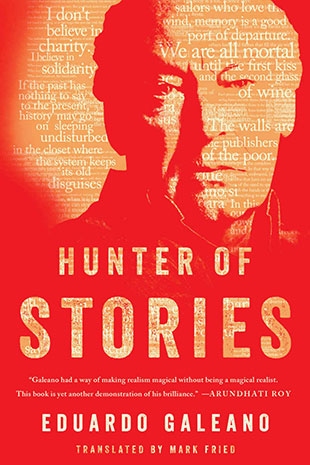