Salons The Joy of Conversation

By Jaida N'ha Sandra, Jon Spayde, Editors of the Utne Reader
A guide to setting up a successful small group for conversation and community.

This down-to-earth resource grew out of a 1991 cover story in Utne Reader called "Salons: How to Revive the Endangered Art of Conversation and Start a Revolution in Your Neighborhood." Soon salons had become a movement as thousands of book clubs, church circles, office work groups, and others transformed themselves into salons, a.k.a councils and study circles. In the preface to this guide, Eric Utne points out that salons have been organized in many cultures: It's just basic to being human -- people need to get together and talk over things they care about and believe in." He goes on with this optimistic observation:

"Indeed, salons could be the antidote for the sense of alienation and malaise that currently infects much of America. They're fun. They're glamorous and evocative of eighteenth-century Paris. And yet they're as simple to produce as a coffee klatch. I believe they might even change the world. Are you up for a cultural revolution?"

Jaida N'Ha Sandra, Jon Spayde, and the Editors of Utne Reader editors open with a history of "a tradition of talk" from ancient Greece to the present. Other chapters cover setting up, organizing, building membership, and keeping a salon going. A very important chapter includes wise advice on choosing topics to discuss, selecting a place to meet, and facilitating the process of conversation with proper leadership and rules. They also discuss variations on the salon model: study circles and councils, book clubs, and online salons.

The authors wisely include commentary on building community in your salon. They note that salons may go through stages and even disband over power struggles. Many thrive and give people a chance to put a human face on the most complex political and social issues of the day. 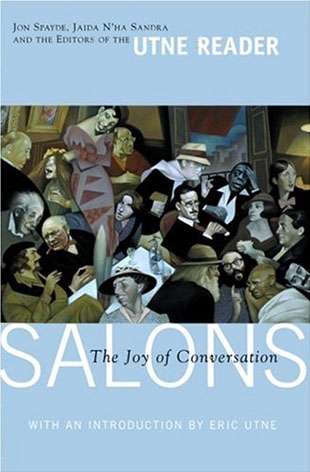