Tribe On Homecoming and Belonging

By Sebastian Junger
A thoughtful and provocative call to learn the meaning of community from indigenous peoples.

Sebastian Junger is a New York Times bestselling author of War, The Perfect Storm, Fire, and Death in Belmont. Together with Tim Hetherington, he directed the Academy Award-nominated film, Restrepo. He is a contributing editor to Vanity Fair who lives in New York City.

Like Lieutenant Dunbar in Dances with Wolves, many people choose — when they are given the chance — to live among American Indians* rather than their own people. Junger gives numerous historical examples of this preference, including a 1782 lament from a French émigré named Hector de Crevecoeur: "Thousands of Europeans are Indians, and we have no examples of even one of those Aborigines having from choice become European. There must be in their social bond something singularly captivating and far superior to anything to be boasted of among us." To this day, there are those who are convinced that they can learn many things from indigenous peoples such as the meaning of dignity, loyalty, belonging, and the quest for meaning.

With an admirable mix of insights from anthropology, psychology, and history, Junger taps into the power of war and natural catastrophes to draw out the goodness of human beings as they care for and share with each other. In a substantive section on the Siege of Sarajevo, the author reveals how one-fifth of the city's population was killed or wounded. Yet many who suffered during this tense situation put others before themselves and learned the value of self-sacrifice.

Junger contends that most people do not like feeling unnecessary, yet that has been the plight of large numbers of war veterans afflicted with Post-Traumatic Stress Disorder (PTSD). The author suggests that until Americans can see clearly that our homeland is at war with itself, deeply divided, and frightened about what the future might hold, we will not be able to develop the solidarity that insures our survival. Junger, like many other writers, challenges us to live more interdependent lives and to revive the robust experience of tribalism espoused by indigenous peoples.

* Junger intentionally uses the phrase "American Indian" on the insistence of an Apache man he interviewed, Gregory Gomez, who points out that anyone born in the U.S. could be considered "Native American." 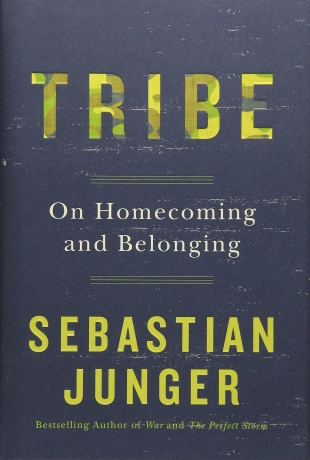