By Wendell Berry, Paul Kingsnorth (ed.)
A fine collection of essays from the prolific farmer, philosopher, and author.

Wendell Berry has lived for most of his life on a farm near Port Royal, Kentucky, trying, as he puts it, "to see from there as far as I can." He has been a philosopher, essayist, poet, novelist, farmer, environmental activist, and cultural critic for more than 50 years. As an alternative to the rampant capitalism that is conquering the world, Berry suggests freedom from enslavement to corporations. He speaks out powerfully and poignantly on behalf of family farmers, their land, and their small towns. His spiritual vision of life is informed by a deep love of nature, a profound regard for the details of place, a respect for small-scale economies, and an advocacy of wise stewardship of the earth.

Paul Kingsnorth chose the 31 essays for this handsome collection as ample evidence of Berry's inspiring defense of character qualities like rugged individualism, diligence, loyalty, and reverence for nature. These virtues stand out in bold contrast to American culture's obsession with capitalism, progress, consumerism, and technology. "While the government is 'studying,' and funding and organizing its Big Thought," Berry writes, "nothing is being done. But the citizen who is willing to Think Little, and, accepting the discipline of that, to go ahead on his own, is already solving the problem."

As we re-read many of these familiar essays, a deep satisfaction took over our minds and bodies. We recalled the love of place and the awe we hold for nature that Berry's writings engendered within us. One such passage is this memorable spiritual reading in "A Native Hill":

"The most exemplary nature is that of the topsoil. It is very Christ-like in its passivity and beneficence, and in the penetrating energy that issues out of its peaceableness. It increases by experience, by the passage of seasons over it, growth rising out of it and returning to it, not by ambition or aggressiveness. It is enriched by all things that die and enter into it. It keeps the past, not as history or as memory, but as richness, new possibility. Its fertility is always building up out of death into promise. Death is the bridge or the tunnel by which its past enters its future." 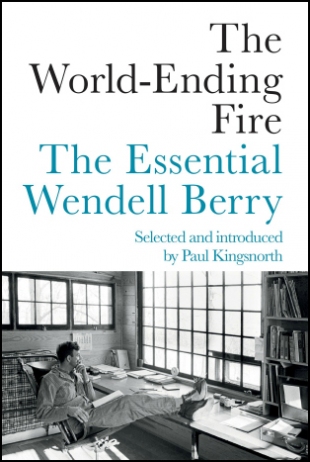 Wendell Berry and the Given Life