These Truths A History of the United States

By Jill Lepore
A bold, well-written, and immersive one-volume history of the United States.

Those are just a few of the topics covered in this bold, well-written, and immersive one-volume history of the United States. The title is taken from the second sentence of the Declaration of Independence: "We hold these truths to be self-evident, that all men are created equal, that they are endowed by their Creator with certain unalienable Rights, that among these are Life, Liberty, and the pursuit of Happiness."

Jill Lepore is a Harvard professor, New Yorker staff writer, and best-selling author. With great energy and thought-provoking choices, she immerses us in "the American experiment" as it is played out in the struggles of the nation's founders, the deep and toxic impact of slavery, the nonviolent heroes of the Civil Rights Movement, the landmark legislation (on the positive side, the G.I. Bill of Rights and on the negative side, the many rulings in favor of the rich and the powerful), the truth-spinning and fake news of both the 1930s and the present era, the dreadful consequences of America starting wars in the name of U.S. exceptionalism, and the shameful treatment of Native Americans, African-Americans, women, and immigrants seeking refuge in this country.

In the Epilogue, Lepore speaks to all of us who believe that much remains to be done to renew our country and counter its many wayward policies:

"[At the close of the Cold War] the American experiment had not ended. A nation born in revolution will forever struggle against chaos. A nation founded on universal rights will wrestle against the forces of particularism. A nation that toppled a hierarchy of birth only to erect a hierarchy of wealth will never know tranquility. A nation of immigrants cannot close its borders. And a nation born in contradiction, liberty in a land of slavery, sovereignty in a land of conquest, will fight, forever, over the meaning of its history." 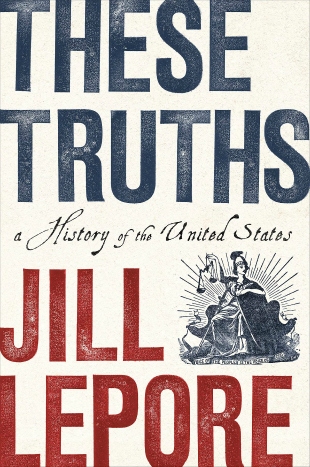