The Boy Who Touched the Stars

In this inspiring English/Spanish autobiography, The Boy Who Touched the Stars / El niño que alcanzó las estrellas, José M. Hernández tells about watching the moon through the car window when his parents, who were farmworkers, finished with the harvest in California and drove his family to visit his grandparents in Central Mexico. He felt like the moon was following the car, and so it became his best friend.

As farmworkers, the family traveled too often for young José to keep up with studies and learn English. That changed when his second-grade teacher, Miss Young, talked with his parents about how helpful it would be to stay in one place for the sake of the children's education. She also found out that José liked astronomy and gave him a copy of The Sun, the Moon, and the Stars. Now books became his best friends.

The combination of seeing Neil Armstrong set foot on the moon with his ongoing love of outer space led José to dream of becoming an astronaut. His parents supported his vision; they told him to do well in school and work hard. He found further encouragement when he heard on his pocket radio that Dr. Franklin Chang-Díaz, a scientist from Costa Rica, was chosen by NASA to be an astronaut. His background and Dr. Chang-Díaz's were similar, giving him hope that he could fulfill his aspirations.

With much concentration and perseverance, José graduated from college as an electrical engineer and went on to become a pilot, get certified as a scuba diver, and even learn Russian. After eleven rejections from NASA, he was finally selected to become an astronaut. He trained for two years and then was assigned to travel aboard the space shuttle Discovery to the International Space Station.

The author is no less purposeful in writing this book than he was about becoming an astronaut. He concludes by writing, "I think we can all reach our own stars if we follow my parents' recipe: Identify your goal, determine how far you are from achieving it and create a place to reach it. Then do well in school and work hard. And don't forget my secret ingredient: never ever give up!"

Steven James Petruccio has illustrated more than 80 picture books, and his illustrations are included in the Illustration History website of the Norman Rockwell Museum. His realistic and engaging paintings for The Boy Who Touched the Stars reinforce the author's unflagging enthusiasm. 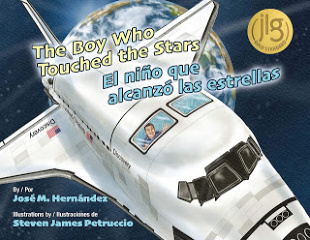