The Last Unknowns Deep, Elegant, Profound Unanswered Questions About the Universe, the Mind, the Future of Civilization, and the Meaning of Life

By John Brockman
A book of questions to get you thinking about what you want to know.

In What Should We Be Worried About? Real Scenarios That Keep Scientists Up at Night, also edited by John Brockman, 150 thinkers from frontier areas of study such as evolutionary biology, genetics, computer science, neurophysiology, and more shared their worries. In this book, Brockman, publisher of Edge.org, collects the responses of 250 of the world's leading scientists, artists, and theorists to the following prompt: "Ask 'The Last Question,' your last question, the question, for which you will be remembered."

Historian Daniel Boorstein called human beings "the asking animal."
And he would definitely agree with humorist James Thurber who wrote
that it is better to know some of the questions than all of the answers.

Here are some of the questions deemed most important in The Last Unknowns: 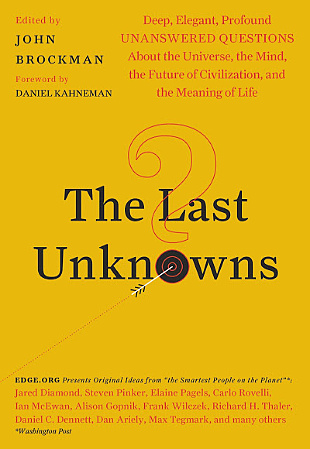