Falter Has the Human Game Begun to Play Itself Out?

By Bill McKibben
An environmental activists fears and hopes about the survival of the human species.

Bill McKibben is an environmental activist and founder of the environmental organization 350.org. For 30 years he has been a prophetic voice warning Americans about the dangers of climate change. His first warnings about global warming appeared in his 1985 book The End of Nature. In Falter, McKibben continues his mission to explain what could happen to the "human game."

He worries about the fact that there are half as many wild animals on the planet as there were in 1970. That's a real threat to the human game but few seem to be worrying about it. How's this for an alarming statistic: Nine million people a year die as a result of pollution, far more than die of AIDS, malaria, TB, and warfare combined. These signs and threats are "stark and immediate," yet somehow people seem to think the human species will survive. According to McKibben, people will be robbed of dignity: "They're all signs of a game badly played — but the game goes on."

There are many ways to be poorer, and floods, droughts, fires, and other climate catastrophes are going to be our teachers. A 2018 World Bank study predicted that further climate change would displace as many as 143 million people from Africa, South Asia, and Latin America by 2050.

In the middle section of the book McKibben examines how influential individuals and institutions (Ayn Rand, the Koch Brothers, Exxon, and some people in Silicon Valley) have prevented changes in the way we live. He also looks at how advances in technology, artificial intelligence, and genetic engineering are drastically affecting the "name of the game." It's possible that these developments could be benign and helpful forces doing our bidding. "Let's assume that everything goes right," McKibben speculates. What does that do to us?

In the final chapters, the author identifies some things that will keep the human game going. These include teamwork, hope, solar panels, capitalizing on powerful multinational corporations joining the environmental causes, and global co-operation. 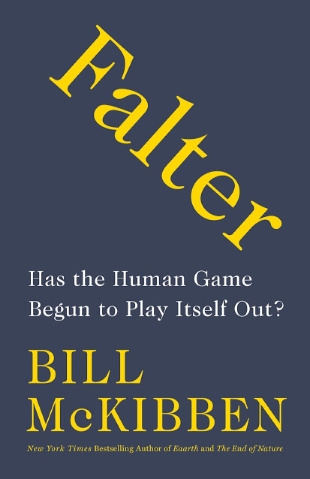